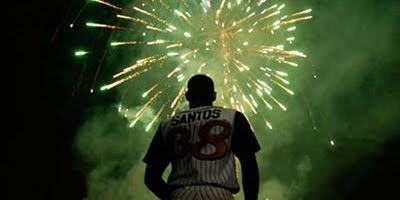 I think I can count on one hand the sports-related films I've actively sought out to watch (although right now I'm unable to muster up five great examples). It's not that I avoid them, but it's never really been a genre that's grabbed my attention. I did, however, make an effort to see Sugar, which concerns the efforts of a young, talented Dominican baseball player, Miguel 'Sugar' Santos (Algenis Perez Soto), who gets picked to travel to America to try out for the minor leagues; and needs to financially support his impoverished family back home. I'm glad I did because it was one of the most thoughtful and engrossing films I saw last year. But Sugar isn't necessarily all about sport itself, per se. Baseball is dwelt upon as a necessary structure that drives the narrative, and the film thoroughly investigates it with conviction (at least as far as I can tell with my limited knowledge of it - although I've read that the film's directors, Ryan Fleck and Anna Boden, conducted extensive research both in the US and the Dominican Republic, where they discovered lead actor Soto, a non-professional). But it's rather more about how the drive to do something at an expert level, whatever it is, can make a person, and how sustaining that level can possibly break them. There are few scenes of last minute scoring and no Rocky-esque triumph of the spirit-style montages. The film indeed ends on a low-key note far from the glory of the baseball pitch.

Fleck and Boden's research goes in depth to show the smaller, more personal details and events, both minor and major in narrative terms: the skill and intricacy involved in learning how to throw the ball in just the right way to create a perfect strike; the nervous hesitation of waiting to be picked for play, or the subsequent humiliation of being sent off; the long in-between hours of passing time on a tour coach; and the levels of adjustment Sugar (so named for his "sweet" way with the ladies) works through when he's posted in Iowa to live with a host family whilst he trains. All these events gradually accrue, leading to a plot turn that sees Sugar re-evaluate what he does and why he's doing it: is the slog of fighting for sporting greatness worth sacrificing old family bonds? And do the fickle ins-and-outs of off-pitch politics mean that he's ultimately expendable? 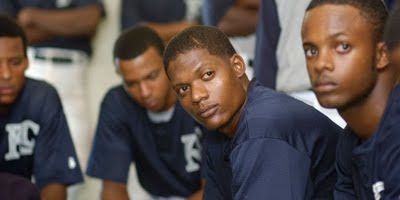 The film doesn't fall into clichéd territory anywhere. The family he stays with are warm-hearted and welcoming, and not, as is sometimes the case with sub-plots in the more run of the mill sports dramas, a cause of struggle and consternation. (Some of the nicest scenes are when Sugar interacts with the mother of the family.) And, despite his nickname, Sugar's tentative romance with the daughter of the (highly religious) family never truly blooms. Everything is closely focused on Sugar in a way that suggests the film is more a meditative portrait of a man evolving as a person than a typical examination of the rigours of life on the path to fame and success. One scene - a long tracking shot filmed over Soto's shoulder, reminiscent of the kind of thing Béla Tarr, Gus Van Sant or the Dardenne brothers specialise in - has the camera keep pace with Sugar as he casually walks through one location (a bar) to another (a bowling alley). Formally it's transitional, a shot that divulges seemingly immaterial information, but it actually speaks volumes about how Sugar feels about not fitting in in a foreign country. It works far better as pure image than a similar, more mundane scene full of expository dialogue would have. Many moments where the camera is intently focused on Sugar's face, seemingly casually observing him, give us a plethora of minute details about him and suggest what he is thinking; this is as much down to the natural and unstrained way Soto performs as it's due to Fleck and Boden's inquisitive camera. Soto is entirely captivating in the role, as are the whole cast. Fleck and Boden's easy way with actors is palpable and gets great results. 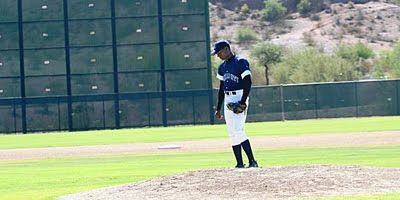 Sugar didn't receive the same level of recognition that Fleck and Boden's previous feature, Half Nelson (2007), did. (That film won twenty-plus awards and gained a Best Actor Oscar nomination for Ryan Gosling in '07; Sugar only received six award nominations.) But it may simply be a less easily classifiable follow up. But in the current climate of American indie filmmaking (whatever that really means these days), which sees many films trade on either novelty devices, quirky nostalgia or high concepts that are more attuned to watered-down mainstream films, it's encouraging, and something to celebrate, that Fleck and Boden are mining their own path. (Similarly to how John Sayles did several decades before.) On the strength of their films so far I'm eagerly looking forward to their next collaboration, an adaptation of Ned Vizzini's novel It's Kind of a Funny Story, which is currently in production. I'm sure their organic and improvisational mode of filmmaking will remain as fresh and engaging a fourth time out as it did here. Sugar is an invigorating and surprising film. I'll be sure to keep my eyes open for more sports-themed movies in future.
Posted by Craig Bloomfield at 13:27