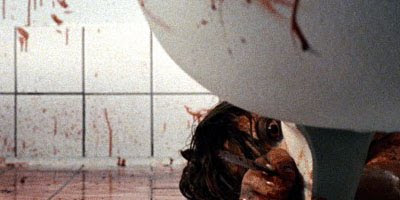 2009 was a great year for horror cinema. Some that I saw were largely staple, workmanlike - though still effective - genre titles (Rogue, Hush, Orphan, Splinter, The Last House on the Left), some were cultish and somewhat innovational (Embodiment of Evil, The Signal), one was cheap and derivative but endearing in its own way (Midnight Movie), a couple were like freakish, separated-twin movies (Timecrimes, Triangle), another couple were daft, hokey and mishapen, but much more interesting than the rather short thrift afforded them (Surveillance, Drag Me to Hell), and two were simply bold and original (Let the Right One In, Inside). But Pascal Laugier's astonishing second film Martyrs was by far the most individual of the bunch. (It shares a kinship to Inside in that both are French, feature predominantly female characters and hardly ever let up on the gore and bloodletting, and both are quite often (wrongly in my view) labelled as Gallic entries in the torture porn sub-genre of horror.) It stood out as one of the freshest, most grim and consistently surprising horrors I've seen in quite a while - and I do see a fair few during the course of a year.

The plot of Martyrs seems complicated from the outset and contains a fair amount of backstory. But this is hazily pencilled in and gets more and more narratively streamlined and precise; it sheds its earlier complexities like skin and strives toward a brutally pared down and acerose end point. But that doesn't mean it ever becomes simplistic. It abandons formulaic structures but still manages to become an intriguing, ever-deepening and determined mystery. The stripping away of the mechanics of plot by the end exposes the hard soul at the centre of the film. And the uncovered soul is what Martyrs is resolutely all about.

Whether a film steadily builds to a riveting conclusion or slowly breaks down to one, the pay-off needs to be worth the investment. Martyrs' pay-off is one of the most bold-faced and ruminative I've seen in quite some time. For me, it was comparable in its confounding what-the-fuck! ridiculousness to the last scenes in both David Cronenberg's eXistenZ (1999) and David Lynch's Lost Highway (1997) - two films with little comparatively or obviously in common with Martyrs, or indeed each other (apart from tones that hint toward science fiction as well as horror to make them like minded enough comrades), but have endings which forgo a clear-cut closure and instead open their ideas out further in their last shots, suggesting the possibility of the narrative continuing beyond the closing credits.

I'm deliberately withholding specific details of Martyrs' plot. Giving too much away, or even a little, risks breaking the culminative spell it weaves. And I care that a viewer new to its warped charms should enter into it unsoiled by any extended synopsising. But it's open season on the bare basics, the stuff that occurs either before the main thrust of the narrative or within its first five-or-so minutes: fifteen years after escaping prolonged abduction and torture (seemingly by an oppressive and shadowy medical establishment), two young women, Lucie (Jampanoï) and Anna (Alaoui), embark on a revenge spree to get back at those responsible - all the time trying to evade a strange, ravaged creature apparently intent on upsetting their plans.

Apart from the bookending scenes of back story set-up and final Super-8 end-credit footage, Martyrs is roughly sequenced as three distinct but interlinked segments: a blood-drenched house siege; an outside force's intrusion; and the resulting confinement. The narrative turns - at first baffling then astounding - of the ever-evolving plot always keeps you guessing as to what will happen next. Nothing is obvious or predictable, and the film never goes where you think it will at any time. I couldn't foresee the path it would take. (I actually watched the film twice on the same day and still found new moments to revel in.) 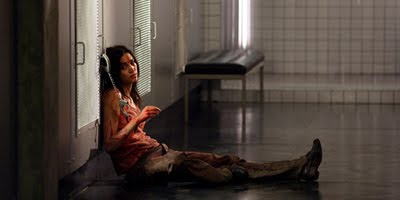 Many folks prefer their horror films to be subtly scary and more psychological in tone and content, rather than all-out gory with wall-to-wall blood and guts, people strapped to chairs going through relentless bouts of depravity, cut-up bodies, severed limbs and close-up evisceration, and the like. Indeed these two approaches - among many others - in horror cinema are essential staples. Martyrs has both, and more besides. It caters to the intrepid and the cautious in the audience. This is one reason why it's so effective and audacious in its aims and objectives. But then this could just be putting a fancy spin on what it achieves. On a pure level it aims to scare and shock in equal measure and succeeds wonderfully. But more than just merely being another entry in the torture porn canon, which a fair few people - critics and cinemagoers alike - have said, it's actually a painful and psychological exploration of guilt, vengeance and the effects of incarceration. Those that merely see a cast of (predominantly) female characters being put through a particularly grim ringer of assault and terror may be missing what is going on beneath the surface. It has a depth and perception of what a horror film is capable of that the likes of the - heavily male-centric - Saw and Hostel films can barely fathom, let alone fully grasp.

Laugier incorporates many incredibly moving moments amid all the grue and gore - with a sparsely-used and affecting music score, compassionate and fully committed performances from the main cast and, above all, a considerate and judicious placement of his camera, particularly in the film's brutally relentless final half hour - that result in a devastatingly saddening tone. In any viewing of Martyrs take careful note of how it is directed in the final stretch, particularly where the camera is positioned exactly where it is, and why. To me, it was never in question that Laugier wasn't revelling in the depiction of female suffering through exploitation, but investigating a sympathetically astute way to show how violence affects his female characters. But on the surface, and in the way many horror films of this ilk will often get lumped together as needlessly "sick", "depraved" or "horrific", people may very well miss the sometimes subtle and telling nuances that lay between the lines. Further to that, aren't horror films - whoever is on the receiving end of all the terror - meant to be horrific? It's right there in the name.

One way to identify some of its gender-based issues and intentions is to note that there are hardly any men in the cast (save for a father and son of an unfortunate family early on - and, more significantly, a hulking, near-faceless goon who is chief in inflicting physical violence near the end of the film). The main female players in the game are not just Lucie and Anna, but those that appear later on, such as the mysterious, elderly matriarch, known only as Mademoiselle (an excellent Catherine Bégin in crude red lipstick, tinted glasses and turban: a portrait of evil in full camp mode), who is the prime manipulator of events.

In fact - for good reasons or bad - it's women who make all the decisions here, and there's nowhere in the film where men aren't subservient to their demands. But ultimately it's a lot more blurry, a lot greyer with its morality than that. Extreme religious fundamentalism, the question of what death means and the very process and exploration of sainthood and suffering are all ideas that Martyrs delves into. This is partly what makes it so compelling and endlessly fascinating. 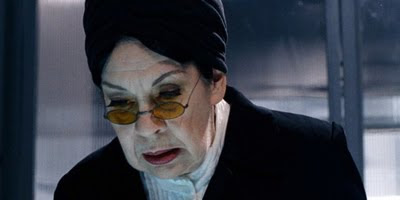 By nature, horror films are of course about death and fear - or fear of death, essentially: the bad folks want to inflict death upon the heroes or heroines; the heroes and heroines try to avoid being killed. That's the template that most, if not all, horror films follow. Martyrs is most singular in that it's the first time in a long time where a filmmaker has dared to explore (as its crucial, key theme) what those fundamentals of the genre are constantly striving to get at and find answers for. It zeroes in on the bullseye and asks: what is death? And what happens when we die? This, in all senses, is its ace card.

Hidden at the end of the closing credits, Laugier includes a fan's dedication that should make any committed horror buff reel with joy at the knowledge that Martyrs is a contemporary entry in a trusted lineage: pour Argento, it says. Outside of this dedication, if you doubt you'd enjoy a film so grim and horrific - one that is truly bold and, more importantly, something that simply doesn't back down and disappear into the market as another feeble retread - but don't have the stomach or the inclination to sit through it, then you'll have to just simply 'keep doubting'.
Posted by Craig Bloomfield at 18:41