At the Cinema: Predators 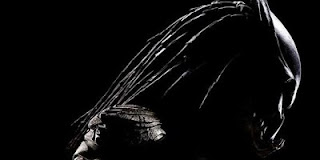 Welcome to the jungle. Eight lethally well-equipped tough guys (and one gal) get unceremoniously parachuted down on hostile, uncharted territory - a place of strange beasties and various tropical fauna (think Lost but nowhere near as confusing) - and are left to defend themselves against a pack of ungodly creatures unsportingly tracking them down, intent on making mincemeat of all and sundry. We know the hunters are alien Predators ("we never knew what to call them," says one character), but the game this time are Adrien Brody, in mumbling hunk mode, and a gaggle of unwanted earth rejects - whose number include a Yakuza assassin, sheepish doctor, Russian Spetsnaz soldier and numerous rebel military types. With guns. Lots of guns. Apparently alone and unwitting they have to work out why they're there in the first place whilst avoiding being ripped in two. 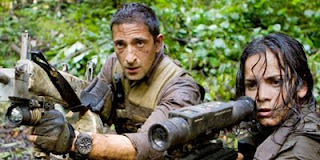 The structure and tone of Predators has a decidedly retrospective hue - a very 1980s hue to be precise; it nicely harks back in style to Predator '87. The events of Arnie's original are alluded to - but its sequel and the recent Alien vs Predator mash-ups are perhaps tactfully ignored - suggesting the film as a Superman Returns style reboot, not a strict continuation. But instead of adding unnecessarily tricky plot diversions or attempts to tie the whole Predator universe into a tidy bow, Nimród Antal (Kontroll, Vacancy) and producer Robert Rodriguez's overhaul is relatively fuss free and, for the most part, gets down to business, post-haste. Although the initial build up takes its time, and there are a few moments where it feels as if it doesn't quite know where it wants to go, but perhaps the narrative's hesitancy chimes with the characters' meandering trepidation - wouldn't we be cautiously nonplussed plonked down on forested, alien terrain with the inevitability of grisly goings-on around every tree? 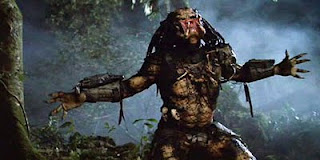 The characters are rote and talk as if they've just read a manual on Tough Movie Speak, and personality is lacking, but we all know that we just came to see random hard-bodied nutjobs get picked off one-by-one by the invisible alien menaces in the most inventively gooey way possible. Although Brody caked in mud and Alice Braga, handy with a sniper rifle, are a pleasure to watch. There are a few successful plot curveballs thrown - not exactly major deviations from the template, but surprising nonetheless - and one or two not so successfully thrown around. And the film takes a bit of time out to ponder the question of who just exactly are the real predators here folks. But tish-tosh to rational  reasoning or plausible context. I enjoyed seeing the predators have a good old-fashioned jungle carve-up once again.
Posted by Craig Bloomfield at 13:14