CCF '06 Reviews: Sympathy for the Devil

Following on from yesterday's slapstick post from the Cambridge Film Festival, here are a few film reviews, jazzed up with a few retrospective edits and tweaks here and there, again for fun and posterity. The aim with these reviews was to be as concise as possible (max. 300 words), to promote the films (i.e. assist in the selling of tickets) and give a flavour of the films in question (hopefully).

Sympathy for the Devil (Jean-Luc Godard/1968)

It’s no surprise that two of the twentieth-century’s most idolised bands both extended their musical proclivities to the silver screen. 1968 saw the Beatles explore tripped-out animation in Yellow Submarine, whilst the Rolling Stones - often considered the artier, grittier band - opted for this documentary essay by Jean-Luc Godard. Godard wanted to work with either band on a film; the Beatles declined, the Stones accepted. SYMPATHY FOR THE DEVIL - a UK premiere screening in a new print - intercuts scenes of the Stones rehearsing the eponymous song with vignettes exploring themes such as race, societal (in)difference, sex and cinema itself. Godard lays out a cultural map and draws allusive comparisons between the nature of performance and political environments, addressed through ideas of revolutionary imbalance that surround progressive artistic creation. Or something to that effect, anyhow. 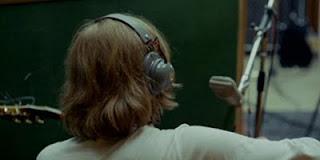 SYMPATHY is an enticing film for hardcore devotees of Godard or the Stones, but more discerning viewers may feel discontented by the film’s drawn-out, fragmented structure. As the rehearsals proceed, more of the song is tantalisingly revealed, but it’s often abruptly halted for lofty polemical assertions - though perhaps no bad thing with Godard in charge. More than anything, the film’s photography is vibrantly assured; Godard’s camera highlights bloodied streaks on a white robe (flagging it as a beacon of despair) and interwoven scenes of a woman spray-painting political street slogans (Cinemarxism!) are filmed in bleak, misty hues. The Stones’ green and orange-panelled recording studio seems almost homely in comparison - with the Gallic auteur himself handing the Stones cups of tea in the penultimate scene. It’s no Medium Cool, but tepid Godard can still hypnotise.

Addendum: for the record, I personally hated Sympathy - it was one of Godard's most tedious, self-involved and lazy films. But, in accordance with the brief I was set at the time, I had to attempt to be as fair as possible, and help the festival lure in Godard-loving punters and general audiences alike. Maybe some of my dislike showed through, who knows. Note the back-handed use of the word 'hypnotise'. As in 'induce sedation'.
Posted by Craig Bloomfield at 22:32