Tuesday Title: The Tomb of Ligeia

Each Tuesday I post a still from the opening titles of a film - as a celebration of great title sequences, cinematic use of typography and the feeling of anticipation in waiting for a film to start...
Today: The Tomb of Ligeia (Roger Corman/1964)

The film's opening is great: Vincent Price - as the fantastically named Verden Fell (who joins Pat Hingle's Bobo Justus in The Grifters and John Hurt's Jellon Lamb in The Proposition as one of the best movie character names ever) - is standing firm over his late wife's coffin, certain of foul circumstance; said late wife's (duel-role-playing Elizabeth Shepherd, as second of these two ladies: the Lady Rowena Trevanion and the Lady Ligeia herself) eyes open, startled by a cat on her tombstone - Price explains it away as a nervous post-death twitch. She's eventually buried, and the opening titles (designed by Peter Howitt and Francis Bodker) appear over some very nice, Gothic illustrations - which look like something Francis Bacon might have dreamt up had he been a commercial illustrator.

The film is based on Edgar Allen Poe's short story 'Ligeia' and, true to his auteur status and reverence among horror filmmakers, it's his name that claims position above the title in Roger Corman's 1964 film. But Corman's unexpected and brooding use of landscape (notably his insistence on using found locations: Castle Acre Priory, Norfolk - not a million miles from me), particularly in the film's pre-opening credit sequence, is just as (visually) evocative as the discernible doses of Poe's macabre wit within the film's script, adapted by Robert Towne.

The opening is a suitably creepy and eloquent introduction to Ligeia - both the film and the wraith-like presence of Fell's almost ever-living wife. And that pesky black cat perched ominously on the tombstone proves more fateful than we first assume. (I was surprised to read that some folk see it as one of Corman's lesser Poe adaptations. I thought it was one of his most interesting and memorable; the inventive framing and expressive use of vibrant colour made the film stand out for me.)

Also worth a mention - Price has one of the best lines in the film, too. Just check out this choice slice of Fell's:

"Christopher, not ten minutes ago I... I tried to kill a stray cat with a cabbage, and all but made love to the Lady Rowena. I succeeded is squashing the cabbage and badly frightening the lady. If only I could lay open my own brain as easily as I did that vegetable, what rot would be freed from its grey leaves."

The film also has one of the best posters of the sixties, too: 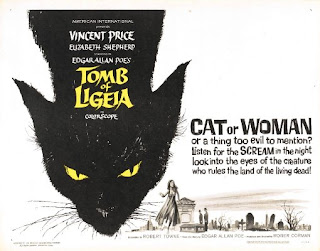 Posted by Craig Bloomfield at 22:09