Anjelica Addendum: a few extra notes on Huston and The Grifters 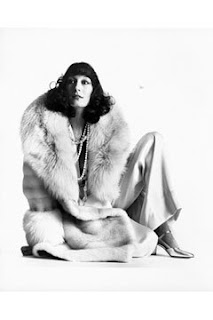 My latest Take Three column over at The Film Experience (where each Sunday I write about three films/performances from a character or supporting actor or actress' career) is the wonderful and always watchable Anjelica Huston. As an addendum, a supplementary addition to the column, I wanted to post up a few tidbits and pictures that I didn't include there; a few things I liked and wanted to make mention of, but that would've made the piece longer than it already is. In my research I came across many fantastic images of Huston that I hadn't seen before and, through looking further into The Grifters (1991) in particular, there were some further thoughts I wanted to share.

This enticing image below - a publicity shot for The Grifters - captures the right mood and feeling of Huston's character, Lilly Dillon. It perfectly echoes the film's screenwriter Donald E. Westlake's description of Lilly in his second draft (March, 1989) of the film's script: '39 but looking younger, beautiful but cold and watchful'. 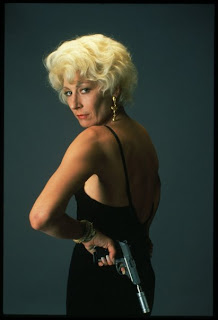 The two actions that Lilly is most often seen doing in the film are smoking and making phone calls; she's constantly angling for quick deals - weighing up the odds for a fix - whilst furiously dragging on a cigarette on the go. She's jittery and apprehensive for much of the film; but at other times she switches gear into hard-case-Lilly mode, to aggressively scold someone or exchange 'don't-fuck-with-me' glares with various periphery characters. Lilly's a vulnerable woman, fighting her corner each step of the way. She nervously veers from one encounter to the next in an attempt to get herself out of an assortment of tricky situations. She exhibits a stallion-like composure; underneath it all she could bolt at any minute. 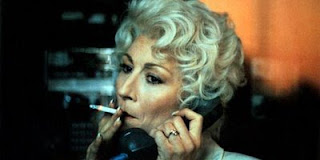 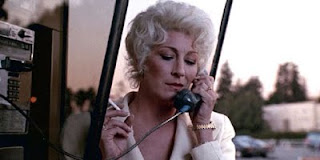 The Grifters' director Stephen Frears often shoots Lilly almost pushed to the edge of the film frame. It's a directorial decision that visually emphasises how she tries to secret herself from the dangerously chaotic world around her. It enhances how she attempts to evade detection and insists on minding her own business - that's when she's not minding the business of others. She's shot like a displaced Edward Hopper subject as seen through cinematographer Oliver Stapleton's inky, noirish camerawork. (Stapleton also brought a similar noir tint to Altman's 1996 film Kansas City.) 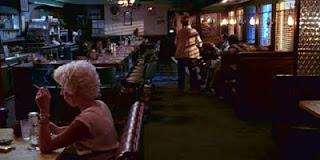 I think Frears and Stapleton's perceptive, implied nod toward Hopper's more famous, and much cinematically referenced, paintings is far subtler, intrinsic and deftly utilised than many of the directors who have taken influence from him, especially in the case of, say, Wim Wenders' self-conscious mimic of Hopper's 1942 painting 'Nighthawks' in his film The End of Violence (1997), below. Wenders is commenting on the Hopper painting (note the camera present, the film-within-a-film angle), but his blatant evocation of it loses something in the process; by directly referencing Hopper's work the nod is then just a straight-up acknowledgement of influence. He's merely idly creating parody, instead of tantalisingly arousing the feel of the painting, or what it might mean, into the film's world - which is what Frears and Stapleton achieve in The Grifters.

They understand that a retro- or neo-noir film has to set up and inhabit its own world fully, and that an homage only adds to, and doesn't define, the overall effectiveness of a given shot in their film. In the scene in The Grifters above (when Lilly, drinking coffee and taking time out from the grift, is rudely interrupted by, and has an altercation with, a pushy tramp) Hopper's sensibility is present and is as discernible as it is easily recallable. But his influence doesn't overcome either the visual composition or the ideas and feelings that Frears wants to impart or arouse in the audience. 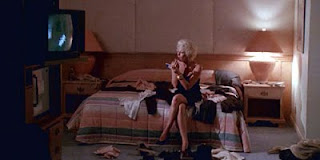 The image above, of Lilly sitting on a hotel bed putting on make-up as she casually glances at a TV screen, readying herself for a particularly crucial encounter, again refers to both Hopper (albeit less so than in the diner scene) and elements of classic Film Noir. But isn't necessarily defined by, or in too much awe of, either reference. And in one brief shot a lot about who Lilly is is revealed.The loneliness, personal private sloppiness and almost regal posture speak volumes about her inner life.

Another way Lilly is shot throughout the film - again it's a particular but often overused directorial attribute in framing shots, though, in my view, not by Frears in The Grifters - is through visual barriers: whether it's with the horizontal lines of venetian blinds (when Lilly visits her son Roy in hospital, below top) or the concertina grid of an elevator shutter (in the film's penultimate shot, below bottom). Such visual divisions, positioned between the character and the viewer, often tend to depict a character as held within their own personal prisons, or perhaps trapped in situations somewhat of their own making.

This idea is somewhat applicable to Lilly, but, more than overstating the commonplace use of these barriers, Frears and Stapleton - and, of course, Huston - show how Lilly is actually forever an outsider looking in (as much as she's an insider on the look out), a woman kept distant from those around her. She's less in a trap than sealed off behind visual obstructions, especially in relation to her son, Roy. Lilly is of the harsh and bruised world of Jim Thompson's The Grifters, but she is also a secluded mother and always at a remove from what she ultimately wants. The allusion to Lilly's interior self is expressed beautifully by Huston in the eternally capricious way she looks at others on screen. 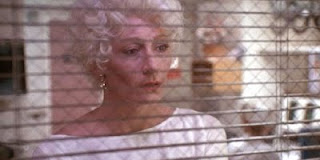 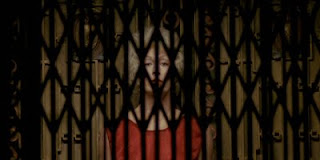 But one of Frears' best allusions/shot references (in regard to that penultimate image of Huston in the elevator, above) is to an image of Mary Astor as femme fatale Brigid O'Shaughnessy in John Huston's The Maltese Falcon (1941). (Note: also in the piece at The Film Experience I make mention of how Frear's depiction of Lilly reaches back through nearly 40 years of noir filmmaking to somewhat chime with Gloria Grahame's character Debby Marsh in Fritz Lang's 1953 noir, The Big Heat.) Of course John Huston was Anjelica's father, and this choice and pertinent noir reference is perhaps the best in The Grifters. There's a plethora of rich and varied pulp-noir lineage nicely contained in Frear's film. One reason of many why it endures as a splendid example of '90s retro-Noir. 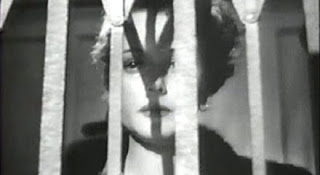 Now just for the hell of it, and because the images are some of the best I've seen of Huston, here are some amazing photographs from early on in her career, when she was a model: 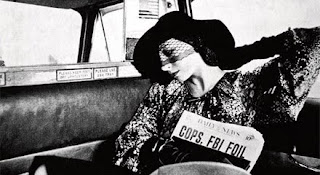 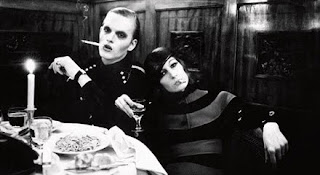 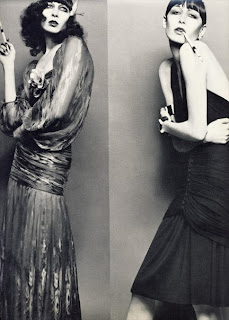 Posted by Craig Bloomfield at 19:48