At the Cinema: Salt 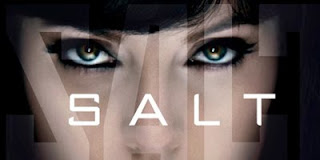 Angelina Jolie performs wonders with a very liberal sprinkling of kick-ass in Salt. In scene after scene it's all she does. Not that I'm complaining - the very idea of Jolie plowing through a city armed only with a How to Kick Ass & Do It Right manual and a gnarly pout was what lured me in. For well over a decade she's been trooping through a glut of action roles - two Lara Crofts, Gone in 60 Seconds, Mr. & Mrs. Smith, Wanted - making short work of dispatching anyone who got in her way. Here, as CIA agent Evelyn Salt, she ramps up the damage up a notch or ten. If I were a henchman given orders to halt Salt, I'd sooner ask for my P45 than attempt to bring her down. So, you wanna blast your way through this office to freedom huh, Ange? Don't let me stop you - there's the door, kick it down and be on your merry way.

After a prologue and some very brief opening titles (who needs either to be long?) she's about to clock off for the day when a Russian defector wanders into her workplace with Soviet secrets to spill. Together with boss Liev Schreiber and counter-ntelligence head Chiwetel Ejiofor, she interrogates him only to find out that he's named her as a Russian sleeper agent set to - good gosh - destroy America by killing its top brass, including the president himself. Alarmed, and like a one-woman A-Team, she makes inventive use of all available wares - a table leg and fire extinguisher suffice nicely - to explode her way free. Then off she trots, with everyone in obligatory hot pursuit. Is she a secret spy? Is she innocent? Does it matter as long as she lays waste to anything and everything in the quest to prove or disprove either fact? Kevin Costner could find No Way Out back in '87 - he should have just stayed put and waited for Jolie to find it for him. 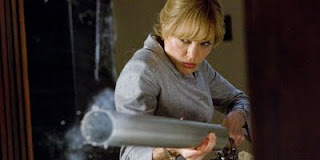 Furniture's not for sitting on, it's for constructing makeshift weaponry, says Salt
It's all very preposterous and incredibly daft. Is this a problem? Is it heck! There are implausibilities and plot holes bigger than her infamous lips, but if you're wasting time trying to spot them you're not watching what really matters: how many times, and how inventively, Jolie issues her smackdowns. She leaps from a trio of trucks during a high-speed chase, slides down a lift shaft (Jolie hasn't got time to press buttons!), and smashes her way out of no less than three buildings; she doesn't bring the roof down - that's been done before - she brings a floor down: that's how hard she is. I suspect she only runs up walls to gain a better vantage point to kick people in the face. The only time she walks anywhere is when director Phillip Noyce chooses to film in slow motion: gliding through the lower deck of a ship Jolie tosses out hand grenades as if she's casually spreading lawn seed - and to a thudding score last heard accompanying liquid Robert Patrick in Terminator 2. 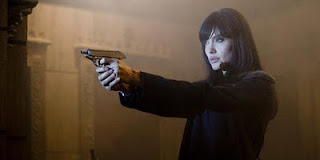 Brunettes have more fun: which side is Jolie gunning for as Salt?
Noyce and cinematographer Robert Elswitt work well together to spotlight Jolie's striking visage. They know what their big draw is - their camera clearly loves her face. (She's given numerous close-ups when she needs to emote purposefully.) Indeed, she's very good at conveying the many moments of internal conflict required. Her character needs to keep us guessing as to who she really is, and Jolie duly retains a poker face throughout; it counteracts the occasional narrative or directorial slip up that - possibly unintentionally - reveals more than it at times needs to. There's also a dafter-than-daft scene where Jolie has to dress as a man (she's infiltrating!), which makes her look like a slightly-melted Tom Cruise waxwork - possibly a sly nod to him turning the role down when he was Edwin rather than Evelyn. Thank gladness he did - we don't need to see him running from Government Types and/or anyone and everyone so soon after last week's Knight & Day. And anyway, this feels entirely right as Ange's adventure.

I'm glad that Jolie's intermittent striking out as an action heroine still yields enjoyable results (Wanted aside). It's often far more refreshing to see a woman cut a dash on the action. I'm sure they'll be further Salty outings. Jason Bourne got sequels. Bond's mastered plenty of missions, and has been recently re-booted. The A-Team were dug up and dusted off a few weeks ago. Let's hope Jolie, Noyce and co. pass us the Salt a few more times. It's immense fun whilst it lasts.
Posted by Craig Bloomfield at 15:52