At the Cinema: The A-Team & The Expendables 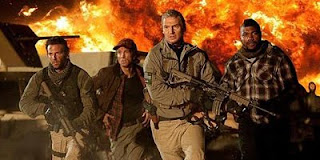 Take two collections of 1980s mercenary rogues, dust them off, tell them 2010 wants them, and plonk them in front of the cameras once again. In the case of one group (Saturday night telly staples) re-cast the wily old rapscallions with brand new actors to make The A-Team version 2.0; with the other collection (near-retirement-age action stars), observe the same battle-scarred hard bodies, but see how the faces have changed: The Expendables are ready for their close-ups, Mr Stallone. Their many close-ups. Their many, many close-ups.

Director Sly lovingly allows his grim-faced, yet still-rock-hard, action mates so many extreme facial shots that The Expendables at times looks like Abstract Expressionist portraiture; all nine resurrected action-cinema behemoths - many of whom have apparently surgically, or through years of battery (or both), re-arranged their visages once, twice, or thrice times since their heyday - are given ample opportunities to gurn up the limelight whilst they burn up the scenery. (I think Jason Statham was the only expendable still operating with his original face.) Top (old) action dogs Arnie and Bruce Willis drop by for a spell, but the're both clearly too wussy to commit to proper roles. 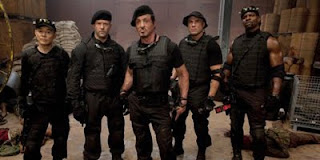 The faces are fresh in The A-Team but the wise-cracks are still older than the hills. There's plenty of back-slapping camaraderie though. Too much, you might say; smug in-jokes and meaningless banter mostly replace any decent one-liners or things like, oh, excitement. The only half-decent one-liner in The A-Team ("You know she's D.O.D.?" - "I don't care if she's G.O.D.!") is only actually funny for about three seconds after it's uttered. But as long as a few risible laughs get wedged as often as possible into the whole shebang these soldiers of (mis)fortune are quite content. At least some dialogue hits the mark - Sly proves that he really shouldn't write one-liners if no one is on hand to properly deliver them (Randy Couture and Jason Statham, I'm looking at both of you).

There should have been a bit of creative role swap across the the two films: Statham should have defected over to The A-Team and played Hannibal, for all the good Liam Neeson was - allowing Bradley Cooper, who would've fared better being expendable (in more ways then one), to hop sides and get pummelled by Dolph Lundgren. Although actually Sly could've done a bit of downsizing himself, for all the heart-pounding action some of his gang neglect to provide - particularly Jet Li and Randy Couture, who do plenty of... sitting around; they should have split off to create The Dispensables. 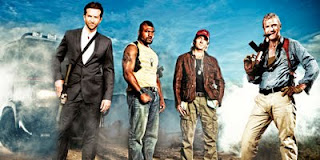 The A-Team quartet essentially ape their predecessors' tics and mannerisms, adding neither fresh charm nor cheer in the process. But then, that's by-and-large all they needed to do - nostalgic fanship is bargained on to do the rest of the work for them. But the surgically-realigned Expendables, despite, or because of, appearances, are perhaps a shade too much on the equable side (Terry Crews aside, who - it's crystal clear from his maniacal one-man-one-gun assault late in the film - certainly doesn't mess around when it comes to besting the opposition).

But how do The A-Team and The E-Team compare in the blowin'-shit-up stakes? Because - if truth be told - that's all anyone who goes to see either film is interested in. (The plots of both could easily be boiled down to: rough good guys get revenge on sneaky bad guys). Joe Carnahan has tongue firmly wedged in cheek on the former: he aims for the sublime and hits the ridiculous - a parachuting tank stunt is so Over the Top that Stallone could've arm wrestled it to the ground, and a game of 'which cup is the ball under', only played with shipping containers and humans, was a silly highlight. Sly tries to add a bit of gritty by attempting to place his near-pornographically-pitched explosion showcase within the perimeter of the enclosure within the bounds of the general area of believability by having his team fight political meglomaniacs of one kind or another. But indeed the all-out action scenes are the better moments in both films; Hannibal and crew's are high in green screen plasticity, Sly's less so - it's surely gotta be the real deal wherever possible with Stallone and co., after all. 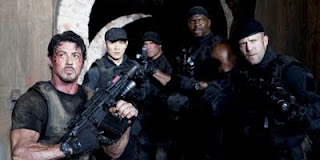 Sly was surely betting on the easy appeal in re-grouping his stalwarts of kick-ass, but maybe he could have gone one better and cast a few stunt men and women in lead roles - thereby making a choicely cheeky allusion to his title and celebrating the true underdogs of action at the same time. If Tarantino managed it - with Zoe Bell in Death Proof - then surely Sly could've rustled up a few stunt friends. Many folk wondered where Steven Seagal and Jean-Claude Van Damme were in Sly's line-up of usual suspects, but where, too, were the likes of Keith David, Cynthia Rothrock, Rowdy Piper, and even Grace Jones? An '80s foursome who, for my money, would have made The Expendables truly dependable.
Posted by Craig Bloomfield at 17:57