With Life During Wartime I've realised that Todd Solondz has become tiresomely near-irrelevant as a filmmaker. It's a joyless, visually ugly and entirely wearing film. It's full of arch dialogue, with no discernible point, that says little about the characters (the same bunch of socially-ill-adjusted blanks that he gave us in his 1998 film Happiness; to which Wartime is a kind of sequel) and more about how resolutely mischievous Solondz still desperately wants his audience to see him. (Read the plot outlines of both films here and here - it's convoluted task and would needlessly pad out the word count here.) The film goes nowhere interesting. It's largely made up of too many forcibly ironic conversations - all too often filmed in dry, uninspired two-shots - that go only part way in illustrating Solondz's not actually all that interesting overriding theme of the forgetting of past deeds and the idea of forgiveness attached to them. 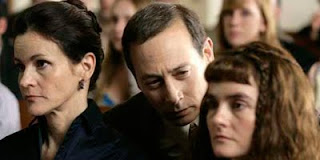 Joyless: Ally Sheedy and Shirley Henderson respond in kind to a
ghostly intervention from Pee Wee Herman in Life During Wartime
All but, I think, two characters in the film cry in various states of self-dissatisfaction, often with no overtly explicable reason to do so. (And they cry unconvincingly at that: whether the characters' crocodile tears were intentionally faux affectations, or whether the actors involved couldn't quite muster up the requisite sadness is a mystery.) Sure, their lives are pained, but, without someone having seen Happiness beforehand (and Solondz has to suppose that some audiences haven't), or due of the self-consciousness of the stilted, pretentious dialogue, it could be read as just a load of miserable fucks spouting ponderous nothings, all after an effect; and through this the thematic thread about forgiving and forgetting is all but lost.

They launch into these teary hissy fits because Solondz prescribes that his characters must appear ironically traumatised at all times, and having them constantly wallow in their self-made woe is his desired way to emphasise this. He doesn't give them anything else to do. They're merely mouthpieces for his half-baked agenda. I didn't see any reason to actually care about them - nor why he felt compelled to bring them back from Happiness. But in taking further the tricksy casting in Palindromes, he reassigns new actors to play the same characters from the earlier film, perhaps because it was a way to inject some freshness to the retread. Or was it because the original actors too saw no reason to further the story? Whatever it was, everything points south to the redundancy of the concept. 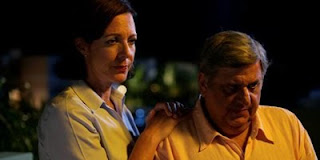 Lifeless During Teatime: Allison Janney and Michael Lerner
wonder quite who they're supposed to be playing
Charlotte Rampling's (as a barroom floozy) and Ally Sheedy's (as Helen, Lara Flynn Boyle in Happiness, now a flaky Hollywood screenwriter) scenes are entirely superfluous; nothing happens that's either funny, interesting or narratively relevant when they're on screen. Rampling, thanks to the awful photography, just looks like a melted Grim Reaper with terrible hair extensions; and Sheedy is given somnambulant dialogue, full of dated references, to drawl, but is disallowed any facial movement, or so it seemed. (She mentions her lover "Keanu" - Keanu? Topical digs at the much-maligned actor feel very early '90s to me.) The rest of the cast - save for Michael Lerner and Allison Janney as a lovestruck, but appropriately troubled, couple - are largely forgettable. Oh, but Solondz has Pee Wee Herman himself (Paul Reubens) pop up as a ghost: once in a restaurant, seemingly just to say the word 'cunt', as if him saying it is the holy grail of shock; and again... in a room full of Emmys - because, you know, it's like a critique of awarding bodies. Or Something. Solondz's satire has never felt so weak.

I've read various folk both online and in print (and spotted various poster quotes) mention the "dark, but hilarious comedy" of the film. But that's only true if comedy were a needle and the characters' neuroticism were the haystack. It's not worth poking around for laughs, dark or otherwise - there aren't any. Solondz only really has one story in him, and he's told it two or three times already. With Wartime he's proved that he has nothing much, or nothing new at least, left to say.
Posted by Craig Bloomfield at 15:12