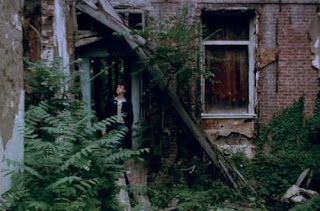 Jim Jarmusch's debut feature Permanent Vacation, filmed in 16mm directly after he dropped out of film school, opens in eerie, memorable fashion: empty New York side streets, strewn with various oddments - wind-blown detritus, waving tramps, discarded products of life - are intercut with slow motion pedestrians (with normal-speed sound) walking busier mainstream streets. An ominous hum plays over these images - backed with discordant chimes and floating saxophone - offering the feel of a lost city, a nowhere zone, as if we're perhaps seeing The Big Apple's mouldy core just after some non-specific apocalyptic disaster. It's a transfixing start to Jarmusch's movie world. Then we settle into (what was to be) familiar Jarmusch territory. His first drifting, anti-leading man, Aloysius "Allie" Parker (Chris Parker), wanders the city fruitlessly, graffitiing slogans on walls, meeting various strangers - most of them savage innocents who are seemingly madder than a bag of cats (Richard Boes as a paranoid war vet, Frankie Faison laughing alone in a cinema lobby, John Lurie as the sax player, María Duval as a wailing Latin waif) - and pondering both the meaning and the meaninglessness of life: the two can often be read as the same with thing Jarmusch. 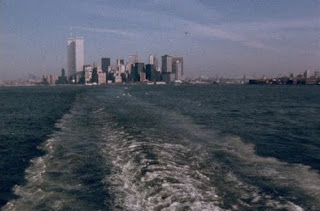 Much like his follow-up film, 1984's Stranger Than Paradise, and many more since this debut - particularly Night on Earth, Broken Flowers and his latest film, The Limits of Control - Jarmusch's primary interest is in the not-doing of things, the little nothing moments in life, and the characters - all stranger-than-strange like-minded souls - that pop up at intermittent junctures to spout often nondescript observations on life and/or culture. For me, it worked best in Down by Law, Dead Man and Mystery Train. Here, though, little of interest is said (Parker's opening and closing monologues are strained with vacant, though apt, pretension). But of course the journey to nowhere - any journey, anywhere vague - is what interests Jarmusch most. The film's title could just as well have been Permanent Stasis, so committed as he is (and was from the start) in repeating ideas and unvarying his chief thematic concerns.

Would his hardcore fans want it any other way? That's what he does, it's who he is: has there ever been a director so inextricable from his film work? The opening five-or-so minutes here are some of the most resonant and disquieting images he's put on screen - and I could see some of that strangeness infiltrate, still, the Spanish street imagery in Control. But after Vacation's 75-minute running time (though it feels longer) of aimless soul-searching, Parker seems none-the-wiser as to what he was after. But then, life-challenging realisations aren't what this drifting hipster is seeking. So to bemoan the film for its inaction may be to miss its point. Although, without much of interest doled out during its middle section I found it hard to care either way. But then the closing images, like the film's unworldly beginning, are another highlight: this time a long take of Manhattan Island, again accompanied by the weirdly beautiful sax-and-chimes score, seen from a departing ferry. We vacate from New York but Jarmusch's film remains motionlessness.
Posted by Craig Bloomfield at 19:09