I've been scouring my (digital) archive files and stumbled upon a few pieces I wrote for the Cambridge Film Festival a few years back (a profile on slapstick, many online and print film reviews, interview with a documentary filmmaker). They were, variously, used on their website, touring presskit and in the festival brochure. These pieces aren't still up on the website (obviously, it's been a while) so I wanted to post them up here for posterity, fun and, well, because - why not.

Below is my profile on the CFF's 2006 strand of slapstick movies. The brief was to make mention of a few key films included in the strand and to, hopefully, drum up a bit of interest in slapstick and several other films linked to it. (I've made a few retrospective editorial tweaks here and there because a bit of time and distance can throw up the odd shameful grammatical/spelling snafu in need of revision.) It's not the most in-depth or expansive analysis on slapstick - but nor, if I remember correctly, was it intended to be - and if I were to write it now I'm sure I'd change a fair bit. Hindsight, eh. It was a giggle to write (and a blast to research) none the less. 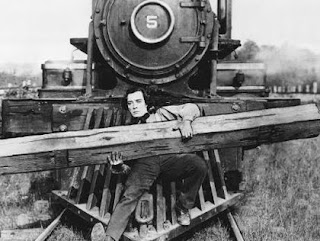 Buster Keaton in The General (1926)
I remember as a kid watching Tom & Jerry cartoons. Every Saturday they had me rolling on the floor, giddily laughing, with wide eyes fixed to the telly. They were usually shown before or after some old black & white film starring, say, Charlie Chaplin or Laurel & Hardy. It wasn’t until I got older that I realised that these old films and Tom & Jerry had a lot in common, of course: both double-acts shared an unwavering desire to entertain; and both were, by and large, denied a voice.

Actual jokes weren’t always necessary to create big grins and belly laughs. It was the slip-ups, the frantic chases, the paint tins precariously balanced above doors and the pies in faces that had us in uncontrollable fits of giggles: Hardy slapped Laurel, Jerry bettered Tom - it was the same smile-inducing thing.

Slapstick, as with all great comedy, often works best as a series of individually remembered moments. One-off gags, goofs and pratfalls come rushing back to us at the mere mention of our favourites films' titles. That’s not to say the whole films aren’t memorable, but slapstick is joyfully made up of the sum of its parts: with Buster Keaton’s THE GENERAL we surely recall him frantically attempting to throw the sleepers ahead of the hurtling train whilst pinned to its front; in Chaplin’s THE GREAT DICTATOR we see his Adenoid Hynkel playfully bouncing the illuminated, plastic globe in the air; and any of Groucho Marx's one-liners in DUCK SOUP can surely be summoned up in a heartbeat by his longtime fans. 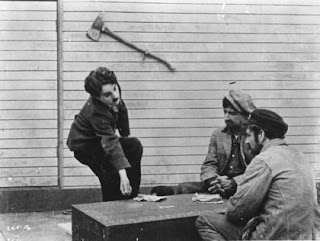 Charlie Chaplin in The Immigrant (1917)
An entire strand at the Festival – SSSH! IT’S STARTING! – is devoted to showcasing the most hilarious shorts and features made during slapstick’s golden period: three Chaplin greats (THE PAWNSHOP, EAST STREET, THE IMMIGRANT) provide a chucklesome triple bill; and Buster Keaton in GO WEST and Harry Langdon in THE STRONG MAN all receive revivals. Most exhilarating of all, Laurel & Hardy and friends get into more fine messes in the strand SHORT FILMS, BIG TROUBLE! and Harold Lloyd scales delirious heights in SAFETY LAST! Tears of joy are compulsory.

It’s not always the silents that instantly breakout mile-wide smiles or split those sides. Slapstick finds a home in a variety of its antecedent performers: Steve Martin - in the wake of the likes of Jerry Lewis - took the best of Chaplin and co. and posited it within his own absurdist worldview in films like THE JERK and ALL OF ME. So, too, did Woody Allen; his early comic masterpieces SLEEPER and BANANAS contained enough surreal sequences to call him a truly practised devotee of slapstick’s finest tradition. It continues to be a core comic staple.

Check out Michel Gondry’s THE SCIENCE OF SLEEP, also showing at the Festival, and find out anew why his fantastical stories - deeply-rooted in the slapstick style - make indelible comic marks on the brains and hearts of contemporary cinemagoers. Silent or with sound, it’s ongoing proof that with great comedy comes great variety; often best thick and fast, skidding to an unbalanced halt in front of our eyes - and ending with a custard pie slapped squarely in the kisser.

I'll post up the other pieces (reviews, interview) soon.
Posted by Craig Bloomfield at 11:45