At the Cinema: I Am Love 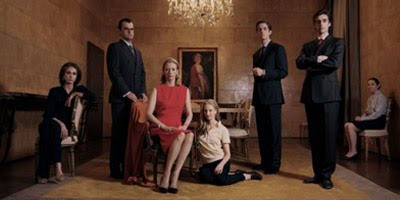 Almost a month after seeing Luca Guadagnino's new film I Am Love I'm still very much in love with it; the honeymoon period is lasting and remains in full effect; I doubt very much it'll wane any time soon. I hadn't seen a new film that uses all the fundamental tools of filmmaking so fully, and so rapturously, for what seems like the longest time. All components - direction, cinematography, music, acting, editing - are fused together in a grandly stylish manner and topped off with the kinds of unfashionable cinematic flourishes (swooping and swooning crane shots, fast zooms, romanticised montages which pair sex with nature, frequent broad and expansive vistas) not too commonly seen in a great many contemporary world cinema releases.

The plot is deceptively simple: the Recchi family, an affluent Milanese textiles dynasty of three generations, gather for a momentous birthday dinner whereupon the ailing patriarch, and head of the family company, Eduardo Sr (Gabriele Ferzetti), announces his successors to be son Tancredi (Pippo Delbono) and - to everyone's surprise - grandson Edo (Flavio Parenti). Present are all the extended family, including Edo's new girlfriend Eva (Diane Fleri) and his sister Betta (Alba Rohrwacher). After the dinner, Tancredi's Russian-born wife Emma (Tilda Swinton) unexpectedly meets Edo's chef friend Antonio (Edoardo Gabbriellini) when he brings a gift of a birthday cake. Some months later, after Eduardo Sr has died, a chance meeting between Emma and Antonio starts in motion a series of events which tests the bonds of the family and ignites Emma's previously withheld passions. 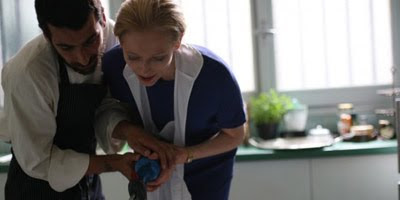 Food is the language of love: Edoardo Gabbriellini and Tilda Swinton
Some folk may see I Am Love's uncommon adherence to formal style - and many of its flushed, vibrantly detailed sequences - as possibly corny, overly florid or all-style-no-substance cinema. But instead of it appearing outmoded, Guadagnino's richly inspired experimentation and unabashed immersion in the heightened details of romantic filmmaking mark the film out as particularly audacious and unafraid to strive for something new, something sensory and altogether more invigorating in the face of more faddish cinematic trends - whilst at the same time discreetly acknowledging a history of grandiose filmmaking (Visconti, Sirk and Hitchcock have been mentioned in passing, but their influence is - to my mind anyhow - piecemeal and temperately acknowledged).

The first half of the film (set in a chilly Milan) maps out in narrative, and indeed psychological, terms the formalities of the affluent family structure (through its hierarchies, social standing and so on) but as plot events veer toward the sunnier climate of Sanremo, and Emma's furtive affair with Antonio begins to bloom, an openness is gradually introduced into the story - and within Emma herself - and the filmmaking correspondingly begins to consciously thaw; it becomes more intimate, the camera frees itself up to drink in all the romanticism: like Emma (perhaps egged on by her discovery of a letter revealing daughter Betta's true sexuality), the film itself breaks away from its previous ceremonious rigour and becomes more attentive to desires that were at first buried. 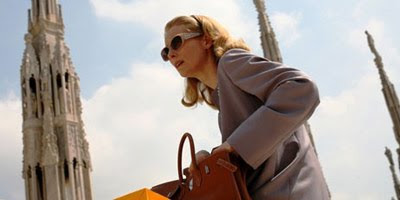 Tilda searches for something more in her life (and in her handbag)
One early scene - just before Emma and Antonio's relationship takes flight - has Emma, Eva and Emma's mother-in-law Allegra (Marisa Berenson) eat at the restaurant where Antonio works: he makes Emma a prawn risotto, and as she tastes it Guadagnino uses his camera to convey her rapture through lighting tricks (the two other women fade into darkness) and colourful close-ups (the plate of food, the fork in Emma's mouth). It's like gastronomic foreplay for the pair, and it works. Guadagnino's elaborately wrought signalling of their bond through something such as a meal might seem a bit too ripe if it didn't actually both infer a connection between them and, strange as it may seem, foreshadow the tragedy at the start of the film's last act. Instead of seeming ridiculous the use of the camera in an overblown, almost operatic way affords plenty of visual pleasures. A swirling, all-in-one crane shot following Emma - as she leaves a party to go downstairs and secretly kiss Antonio - and then the preparation of a meal and the servants who take it back upstairs to the awaiting guests - was so beautifully constructed and seamlessly carried out that it deserves its own singular appreciation.

But Guadagnino confidently conveys all elements of the film with bold conviction. He maps out a specific milieu and hits it spot on. To my mind, there isn't one misjudged shot or questionable artistic decision anywhere in the film: it's near faultless. Tilda Swinton (who learnt both Russian and Italian for the role) is spellbinding - in the way that only she can often be - as Emma, and the rest of the cast are equally as splendid. French cinematographer Yorick Le Saux's (who worked with Swinton on 2008's Julia) lighting is instrumental in arousing exactly the perfect mood for each scene, and John Adams music is nothing less than essential - it surrounds the film with a fitting grandeur (it's possibly the best and most rousing score for a film since Alexandre Desplat's amazing music for 2004's Birth - a film which I Am Love is partially similar to). The film's ending is bombastic, even more heightened than anywhere earlier and comes on like a forceful emotional crescendo (and it's here where all the tools of cinema culminate perfectly). 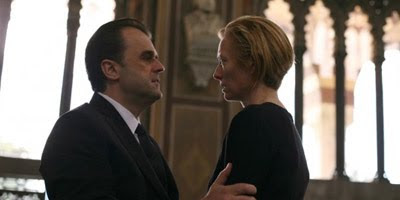 Pippo Delbono and Swinton face off in I Am Love
There have been several films released so far this year which have been accused of priding style over content, and with each one I've none the less found there to be a great amount of valid content to immerse myself in. A Single Man ('60s jazzy LA), Shutter Island (rain-washed '40s noir) and now I Am Love ('00s turn of the century love song) have all been mentioned in terms of their respective filmmakers taking a look back at cinema's past to eke out newfilmic territory. But in a climate where there's an overabundance of derivative rom-coms, over-budgeted spectacle or over-familiar gritty worthiness, personalised and uncharacteristically adventurous filmmaking of this quality is to be applauded, not least for attempting to provide an alternative viewing experience. (And every genre or movement of film draws on its own past.) Films like this, that sink a spectator deep into their worlds through an array of bold cinematic devices, are too few and far between.

What Guadagnino and Tilda Swinton (and indeed all involved) achieve with I Am Love is something to be rightfully cherished and savoured. (It came to fruition after nearly 11 years of planning and production). It's full to the brim, and occasionally overflowing, with a wondrous level of cinematic substance - emotional and aesthetic, passionate and visually skilled - of the kind that doesn't often come along in any given year. It's a personal hymn to Italian cinema, a bold exploration of freeing oneself from imposed societal limits (and denunciation of constraining responsibility) and an open letter to all those that crave that little bit more beauty in cinema. It's a cryptically mysterious melodrama and an all-sirens-blazing celebration of love. But more than all this, I Am Love is a film that feels alive.
Posted by Craig Bloomfield at 17:14