At the Cinema: A Nightmare on Elm Street 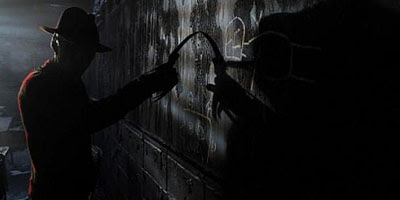 If Michael Myers, Jason Voorhees and Freddy Krueger stood for some kind of warped movie killer election, who would you vote for?

Michael Myers is the longest-standing candidate, having begun his career in 1978 and served 22 terms in movie-villain "office". Jason has the most staying power; at present count he's been re-elected ten times (12 if you count the 2003 coalition with Freddy and the 2009 reboot). Freddy, however, has served the least time, but he did broker a hefty deal on high-profile marketing, and is currently plastered all over the web for a new A Nightmare on Elm Street, so he's the most topically relevant right now. But who stays in power? You decide!

Daft and somewhat tenuous election links aside, this trio of slasher-film titans of terror have over the last three years re-emerged in new, though not necessarily improved, incarnations in three variable remakes of the most visible of the late-'70s-early-'80s horror franchises. Mike was first up in 2007 for Rob Zombie's Halloween, followed two years later by Jason's return to Camp Crystal Lake on Friday the 13th, and now Michael Bay has awoken Freddy (in the same way he dredged up Jason, not before asking Leatherface out to play) for another run of nightmares on Elm Street.

The new film, though, is an inept regurgitation of many of the not-so-good bits only from Wes Craven's 1984 original. Its secondhand narrative is vastly laboured and clunky from beginning to end. Some of Craven's best bits are half repeated though massively fudged (Nancy's deep bathe with Freddy is here merely a hand protruding from bath water; Jesse's (Thomas Dekker) - Rod in Craven's film - murder in jail is unimaginative, though now vastly bloodier, and arrives via Freddy's knife-glove, where it was a hanging-by-proxy in the original), and the moments that are picked up wholesale from first time around are weaker by comparison (Kris' midnight wander into her garden has none of the icky scariness of Tina's sweat-inducing original backyard encounter with Freddy; and Nancy's mum's rubber-bodied - and cheaply hilarious - death by being pulled through a door's too-small window at the close of Craven's film is now a CGI-enhanced pulled-into-a-mirror attack). Some scenes from the '84 film are randomly forked up and ignominiously scattered throughout: the mattress-gushing ceiling of blood doesn't occur during Kris' (Tina in Craven's film) bed-based death, as it did in the original, but later on when Nancy is plopped back to reality after one rather uneventful nightmare escape - which features not the original's inspired staircase of goo but a whole hallway of tar-like gloop). 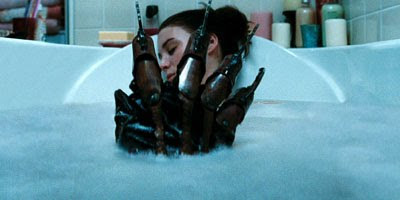 Make yourself useful and hand me the Radox, Freddy!
Of course, Bay and Bayer (like Dumb & Dumber, but less perceptive) are clearly keen to avoid a straight retread, but in missing out the parts that made the original film horribly memorable they lose sight of why it worked well enough to start with. One character, emo-mope Quentin (Kyle Gallner), is introduced too-late in the film as a member of his school's swim team - purely, it seems, for the fact that a swimming pool could then act as a conduit to shunt him from waking life to Freddy's nightmare world (and to draft in some ill-placed exposition). But everything about his character (Joy Division t-shirt, Gothic posters and so on) suggests he's as far from athletic as can be - the crowbars and shoehorns are actually visible. With every aspect of this reboot it's as if B&B have remodelled an old car with new-fangled components all in the wrong order. I'm no remake basher for the sake of it, but this Nightmare (as with Bay's other botch jobs) very nearly tests my resolve to its limit.

The mainly pallid, Twilight-lite, pill-popping teen cast make little impact, save for Katie Cassidy (so good in TV's excellent Dynasty-meets-Friday the 13th horror soap Harper's Island last year) as Kris - but she exits the film way too soon, leaving open a gaping hole to be filled by Rooney Mara (as Nancy) and Gallner as the somnambulistic final leads. (Is it a prerequisite that only in horror remakes do the more glam, blond types fare much worse than the sulky Marilyn Manson types?) Either way, a better replacement for the dull Mara would've been Madeline Zima (Heroes' Gretchen), who has the unconventional looks and fragile tenor (as did Heather Langenkamp circa '84) to pull off the role with increasing vigour and fearfulness: if there's a sequel - and inevitably there will be - keep your diary clear Madeline, you could still be Nancy!

The adults don't fare any better either. At least Ronee Blakley and John Saxon acted like weary, concerned parents for Craven - here Nancy's mum and Quentin's dad simply feel like shrugging bystanders. And as for Freddy (Jackie Earle Haley) himself, he has all the menace of a mildly irked pork scratching. And, boy, does he deliver his lines as if, like the rest of the cast, he's sleepwalking his way through a nightmare he surely wished wasn't of his own making. 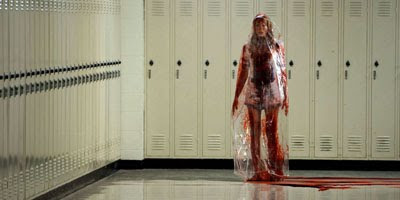 Lady Gaga's latest outfit goes down a storm at Springwood High.
With his Platinum Dunes production outfit Bay has gracelessly chucked out a variety of cheaply made horror remakes and rehashes in recent years (The Texas Chainsaw Massacre in 2003, The Amityville Horror in 2005, The Hitcher in 2007 and Friday the 13th in 2009), and Nightmare sits alongside them without upsetting his shoddy applecart. Music-video directors both, Marcus Nispel (who directed both the Texas Chainsaw Massacre and Friday the 13th remakes) and this Nightmare's director Samuel Bayer are essentially Bay's hired help - go-to guys when his need for a new horror hack arises. Rob Zombie at least attempted to put his own stamp on Halloween mark 2. The difference here, though, is that Zombie's particularly grisly horror sensibilities were felt in his remake. His style may have been derivative but he injected much enthusiasm and a lifetime's worth of horror movie adoration into it; his was a fan-made film at least - the other two are merely fairweather dabblers; they'd likely shoot anything Bay pays them to. It feels as if the real villain here is actually Bay; Freddy Krueger is just his latest onscreen right-hand man.

But perhaps Bay's short-sighted policies with his Nightmare retread weren't ever going to inspire in me a positive response. I cast my vote for longevity: I'm a Michael Myers supporter through and through (though I'm occasionally a tactical voter: my traitorous movie-lover's nature allows me to secretly campaign for Jason from time to time). My first and latest - and indeed every one of the seven-or-eight in between - trips to John Carpenter's Haddonfield have, each time, left me quiveringly fearful of what an unstoppable slasher movie villain is capable of. All three of these famous movie killers got eye-rollingly sillier as, over the years, their respective sequels' storylines became more elaborately OTT. But somehow Halloween night, or a stay at Camp Crystal Lake, has always been preferable to a jaunt down Elm Street.
Posted by Craig Bloomfield at 17:58