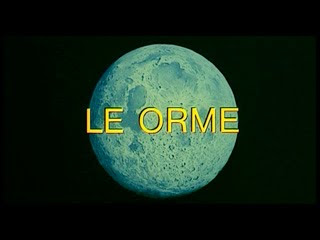 I saw Footprints only recently (on DVD via the excellent Shameless label), and from its first frame onwards it riveted my attention to the screen. I'm a major sucker for explorations of psychological imbalance in - more often than not - female main characters (films such as Carnival of Souls, Red Desert, Safe, Mulholland Dr. fit this template nicely) and Bazzoni's 1975 film joins their ranks. The film follows Italian translator Alice Cepsi (Florinda Bolkan) as she tries to piece together three missing days in her life.

Its opening title shot is a simple visual representation of Luigi Bazzoni's (and uncredited co-director Mario Fanelli's) overarching themes in Footprints. It's the figurehead image which connects Alice with the unaccounted for psychic gap in her existence. The image of the moon haunts her throughout the film. Its origin is either that of the dream she has - which seemingly and inexplicably lasts three days - or from the old black and white film (perhaps featuring the stranded astronaut that we see over the opening titles, and who intermittently pops up throughout the narrative) that she barely remembers watching years ago. Or maybe both. The film never tells us. Luna and lunacy are entwined in her mind: she may very well be the lost astronaut herself.

The all-caps, yellow and giallo-esque typography boldly appears on the screen, very nearly encapsulated within the expanse of the blueish-green moon behind it. It's a mysterious and - accompanied by the beautiful organ-lead score by Italian film composer Nicola Piovani - enticing first image. It leads you into the narrative unaware of exactly what form the plot will take. The lunar flashbacks/dream memories/film clips sit somewhat at odds with the remaining visual style of the film - although the flattened, neatly structured visuals of the film's first 20-or-so minutes that directly follow the opening (Bolkan is often shot behind layers of glass or dwarfed by austere architecture) are as coldly visualised as the blue-tinted black-and-white of the moon imagery.

Connections are made visually as well as psychologically, from the title onwards, and through to the fraught and despairing climax: astronaut-sized footprints are embedded into the sand on a beach in Garma, which, in an ultimately sad and terrifying manner, make for an uncanny parallel to the moon footage of the opening title. Footprints is a beautifully-made and truly unusual celestial horror film.
Posted by Craig Bloomfield at 20:59