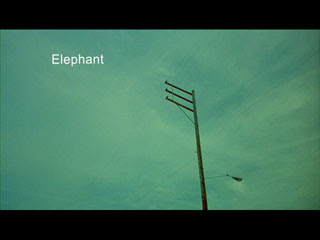 The spare typography (simple white Helvetica by Title House Digital) and imagery (a fixed shot of a telegraph pole and a streetlamp against a jade-green evening sky which - through Eric Edwards* time lapse photography - morphs into inky nighttime) that opens Elephant, the second film in Gus Van Sant's loose, unofficial 'Death Trilogy'** - after Gerry (2002) and before Last Days (2004) - is as unfussy, clear and direct as the actual film itself initially appears to be.

Elephant is all these things, but it does contain more within its seemingly slimmed narrative than what physically occurs on the screen in front of us. Of course, the visual scheme of the film includes horrific events (a fictionalised account of a high school shooting, essentially Columbine), but the crucial, dazed poetics of how Van Sant depicts these events (repeated sequences from varying perspectives, long, slow tracking shots over characters' shoulders, or tailing close behind them, slowed-down instances of interaction between one or more characters) hint at volumes of meaning beneath its surface. The film has innumerable buried complexities. Everything is frighteningly normal, but just ever-so disquieting: this is just a day, but not just any old day.

Its almost tactile, ever-shifting camerawork, shows us no symptoms or reasoning for what was about to happen, but it shows us - in a variety of fragmented, perhaps movable, scenes and moments - an unsolvable puzzle, a day broken up into, simply, the things that occurred before, during and just after the shootings at the school. The film's intelligent, artistically clear boldness is hinted at in the uncluttered elegance of the opening titles. Van Sant gets straight to the point because there's much to say here (or, more pertinently, much to leave judiciously unsaid).

Van Sant didn't need to open his film with anything other than a simple introductory image/text combination - we need to know what before the series of suggested whys, whens and hows. The following visuals told us everything we needed to know, piece by piece, and without much in the way of exterior complication. News coverage of real life events such as those depicted in Elephant look at every conceivable angle through journalistic means (as they should), but this is very much the artist's view: nonliteral and full of questioning; all content, and with a simple "headline". In this context the word 'Elephant' means many different perplexing things.

*Eric Edwards, Van Sant's sometime cinematography collaborator, did the time lapse photography in some scenes in Elephant; the great Harris Savides was the main, credited cinematographer

**or perhaps quadrilogy, if you count Paranoid Park (2007), which I do - each of all four of these films pairs untimely and/or unexpected death with youth in a variety of ways.
Posted by Craig Bloomfield at 18:51