Lynn Redgrave has died age 67, from what is believed to be breast cancer, which she suffered from during the last seven years (although this has yet to be fully confirmed). This sad news comes a month after her brother, fellow actor Corin Redgrave, and just over a year since niece Natasha Richardson both passed away. It's been a sad and devastating time for the Redgrave/Richardson families.

Redgrave was a greatly talented actress who, altogether, appeared in nearly 100 films and TV shows, along with much acclaimed theatre work. Major and notable roles were as Georgy in Georgy Girl (1966) (which gained her the first of two Oscar nominations; the second was for Gods and Monsters in 1998), as the Queen in Woody Allen's Every Thing You Always Wanted to Know About Sex * But Were Afraid to Ask (1972), Scott Hicks' Shine (1996) and alongside sister Vanessa Redgrave and Richardson in James Ivory's The White Countess in 2005. 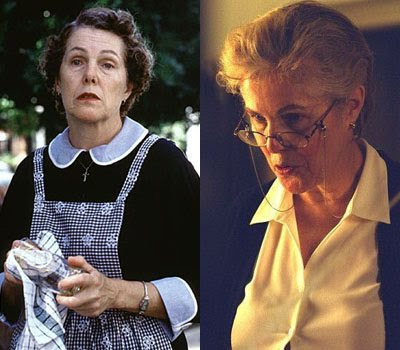 Two from Redgrave: left, in Gods and Monsters; right in Spider
My personal favourites roles were as Ian McKellen's (as Frankenstein director James Whale) loyal housekeeper Hanna in Bill Condon's Gods and Monsters, and, coincidentally, as another housekeeper, Mrs. Wilkinson, in David Cronenberg's Spider (2002). Both were incredible performances which greatly enhanced their respective films with a singular style and conviction.

Her resignedly withering Hanna in Gods and Monsters was rightly honoured by the Academy (she gave by far the best of the five nominated supporting actress turns that year, although Judi Dench won for Shakespeare in Love) and she effortlessly matched McKellen scene-for-scene in the film. And in Spider she added to the film's air of sly menace and gave an indelible turn as the staid but mysterious Mrs. Wilkinson, the owner of the halfway where Ralph Fiennes' Spider stays. It's for these two great, crucial supporting performances that I'll remember her work the most.