Tuesday Title: Back to the Future

Today: Back to the Future (Robert Zemeckis/1985) 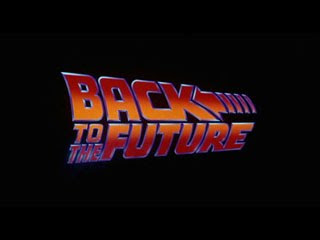 Great Scott! If you're of a certain age you may well have drawn this opening title - or is it more of a logo? - in a sketch or exercise book. I did. But it never looked as good as it did at the start of the film of course. Impactful, colourful (gradient red to yellow, "electric" blue outline), immediately recognisable and exciting. Type bent (leant?) out of shape: the 'back' pushed, by the arrow, back to the past; the 'future' zooming headlong into the future. So simple and - yes, groan - it's filled with nostalgia. I look at it now and feel like watching the actual film - I can almost hear Huey Lewis and his News (though is that a good thing?). Where's Doc Brown when you need him?
Posted by Craig Bloomfield at 18:14