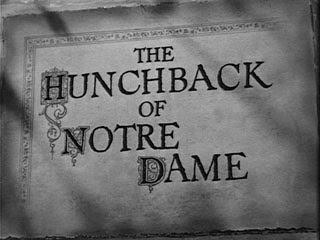 I remember way back when I was a kid watching this version of Hunchback on a random whim with my mother and brother. I didn't know it was the Dieterle/Laughton version then, as I was about six or seven years old - clearly long before I became manic about cinema. (A spot of research in the years since revealed this '39 Hunchback to be the one we saw.) My father was overseas a lot working when I was young, and so we often watched old films on television in the evenings.

I remember it vividly for how my young mind instinctively reacted to it (oh, how Quasimodo's life must have been so sad! The unfairness of it all!... Why, mum, why... does he ring so many bells all the time?), more than any technical attributes (who notices subtlties in lighting or editing at age six?). Its opening title is more a handy reminder, a simple visual nudge, of what a great film it is - and for the fact that it's one of my earliest film-watching memories - rather than anything particularly spectacular in itself. (It's typically straightforward for its time: shadows cast over the titles "etched" onto the side of the cathedral; bells ringing on the soundtrack) But, boy, is it a good opening. I loved the experience of watching this back then, and still do. I think I'm about ready to watch it again soon.

Also, it was this film - particularly Charles Laughton's starring role - that, years later, led me to seek out and watch his one and only film as director, The Night of the Hunter; it then ended up, alongside Hunchback, as being one of my favourite of his films.
Posted by Craig Bloomfield at 19:03