Tuesday Title: Shaun of the Dead 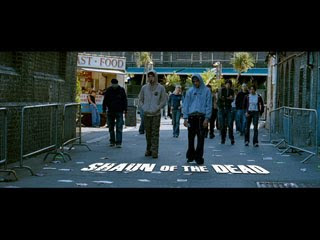 It was at this point, right at the beginning of Edgar Wright and Simon Pegg's 's insanely entertaining and perceptively made partial parody of Dawn of the Dead/zombie movies (a zom-rom-com!), that I knew they had got their parody spot on. Shaun doesn't regurgitate anything from its influence, it simply responds with a loving nod; it draws great comedy - and startling moments of apt gore - from its premise.

Dawn is one of my all-time favourite zombie films (well, all-time favourite films full stop - see header image), so I was eager to see what Wright & Pegg would do with the concept (which they married to a contemporary British setting). Their firm grasp of comedy wasn't in question (the excellent Spaced came before it), and from interviews - and indeed some of the comedy references in Spaced - both had spoken eloquently about their passion for zombie films.

This opening title shot is witty, creative and doesn't hang about: undead teens trudge over the diegetically-Incorporated title: the words laid out flat on the ground if as like a corpse itself. From the opening titles onwards it just got better.
Posted by Craig Bloomfield at 18:50