Tuesday Title: Precious: Based on the Novel Push by Sapphire

Today: Precious: Based on the Novel Push by Sapphire (Lee Daniels/2009) 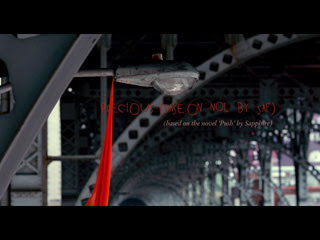 This is how Precious: Based on the Novel Push by Sapphire starts. On screen the title appears as 'Precious (Base on Nol by Saf)' - with the full title in parenthesis underneath: an abbreviated, personalised and slang-style reconfiguring of the film's full name. (And it's often reduced to just 'Precious'.) A sense of place is clearly established, and the reoccurring motif of Precious' (Gabourey Sidibe) red scarf is the first thing we see. She carries it around with her everywhere - in her hair, wrapped around her wrist, or at times to be spotted somewhere in the background of a shot (as in the opening titles here).

Maybe it's an emblem that provides some kind of meaning in her life: lost, found, caught up, passed around; tied up in knots, wrapped up in her own private world, and finally let free. I haven't read the novel, although I'm sure it may very well explain the true significance of the red scarf and what it means. But going into the film cold, with no idea of its importance (if any), it can mean everything and nothing. Is it a symbol of Precious' personal state, a key visual token of her life - or just a favourite accessory? (It also relates, more obviously, to blood and anger, too.) Either way, red is the colour thematically chosen throughout the film to represent Precious. 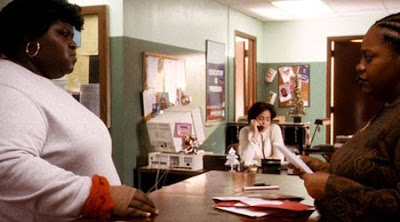 Intentionally misspelled, personalised or just plain quirky plays on a film's title can often be annoying; simply there just to appear different for its own sake (I'm thinking of S1m0ne, Thir13en Ghosts, (500) Days of Summer and (groan) Inglourious Basterds here). But Precious is born out of an integrally personalised journey - an exploration of one girl's interior fantasies and sadly distressing real existence (she keeps a journal; the wording likely come straight from her) - so the title, in its own particular way, should show outwardly this in a visual manner.

The way the red scarf chimes with the red of the individually scrawled hand-drawn type, imposed over the image of the underside of a bridge on a chilly and downbeat Harlem morning, was clearly Lee Daniels' pertinent, visually arresting and distinct way to introduce us to the film, and his main character, and to give everything its own personality. Not since Julianne Moore wore that mauve headscarf in Far from Heaven has an accessory stood for just that little bit more than itself in a film.

The promotional posters for Precious are also some of the most artistically inventive and striking I've seen in a while, too: 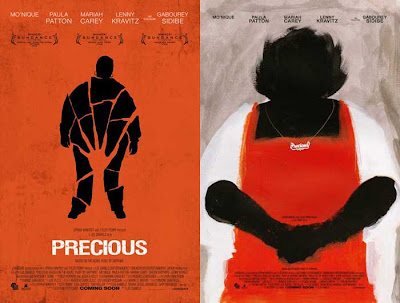 Posted by Craig Bloomfield at 20:53