At the Cinema: A Screaming Man 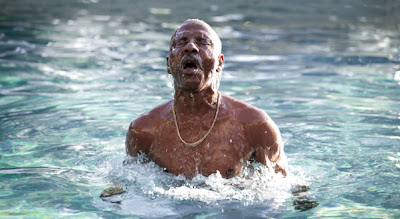 I much admired Chad filmmaker Mahamat-Saleh Haroun's 2007 feature Daratt/Dry Season. (It took the no.4 spot in my year-end list that year.) He’s triumphed again with his fourth feature, A Screaming Man. Made in the same refined and frank vein as Daratt, this new film follows Adam (Youssouf Djaoro), a pool cleaner and former swimming champion who works at an exclusive N'Djamena hotel with the assistance of his son, Abdel (Diouc Koma). After a job reshuffle Adam loses his job to Abdel; he sinks into a depression, fuelled by anger and humiliation, and takes unexpected action; a questionable decision that threatens his family's personal stability just as the country's situation worsens when civil war breaks out and rebel armies infiltrate the area. 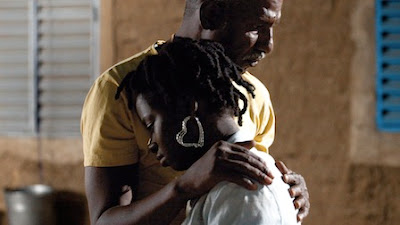 Much of the film’s drama is underplayed. Haroun’s camera focuses on Adam in a curious, contemplative manner, observing with deftness the way his livelihood and pride is slowly and slyly wrenched from him. Events major and minor are directed with crisp elegance, ensuring the plot never strays into falsity despite the tinge of melodrama inherent in it. One crucial shot, detailing a troubling decision Adam makes halfway in, tells us everything we need to know in a single, slow zoom into Adam’s face as he silently wallows in his demotion. Work is life for him; his job a necessity and cherished position, however lowly, which still holds for him the shine of his former swimming glories. 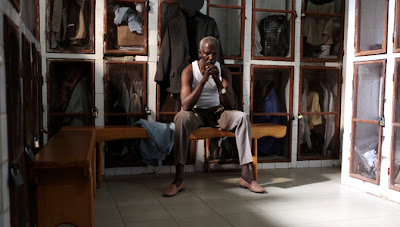 Djaoro (who also gave a fine performance as the baker in Daratt) conveys regret and selfishness with natural ease. The film and the camera tracks him with generosity and guile. That we care about him despite his permanently-furrowed demeanour and questionable ethics comes down to his strong performance. Music is used sparingly, and feels loaded with sombre emotion when it cuts in; it disrupts key moments unexpectedly to underline pertinent visual points. Laurent Brunet's vivid photography boldly highlights areas of respite within dim home interiors as much as it luxuriates in the expansive splendour of the hotel poolside. It's photography that visually arouses a lot emotionally with seemingly little effort. A Screaming Man details stunted, withheld lives – affected by social pressures and a fraught political climate – with a simple yet devastating awareness of the fragility of responsibility. It's another great work from a compelling filmmaker who's carving out an individual presence in world cinema.
Posted by Craig Bloomfield at 21:38