This is the first in a quite likely semi-regular series of randomly selected posts on older films (some quite old, some very old, some not that old) that I've written about previously elsewhere, or had sitting dormant in the 'unfinished review bank', but have added further/new thoughts on for the sake of reproducing them here. (In some cases some much-needed judicious editing has occurred, too.) I've called it Dark Eye Archive because it sounds about right - and it was marginally better than the pun-happy Archive Socket.

The weathered world in which the events of Matthew Ryan Hoge's  The United States of Leland take place is completely airless, hermetic. Every character uselessly ponders their own and others’ actions without the barest morsel of insight. The plot has teen Leland (Ryan Gosling) accused of murdering an autistic boy, so goes to juvenile detention; the reasons for the crime make up the bulk of the resulting narrative. It’s very much a film that dictates its characters blithely blunder into one another’s lives (but without significant reason to), and then feels content that they’re operating according to some kind of lived experience. It’s a depressive’s wish-fulfilment job – a film to gloomily wallow in. The kind of despondently-toned, ensemble drama all about (sub)urban angst and familial alienation were particularly rife in‘00s indie cinema. Some, in whole or in part, made a virtue out of grief control (Magnolia, Pieces of April, The Ice Storm); some induced a state of cheerless near somnambulism (The Safety of Objects, Garden State, The Chumscrubber). It’s a film that floats or sinks on the assembled cast’s successful transference of emotion. by that line of thought, The United States of Leland is the Bismarck. 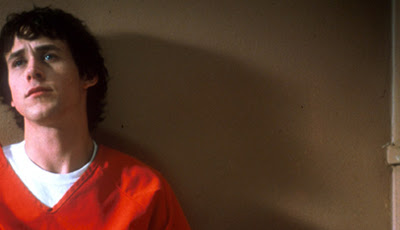 Gosling, as Leland (giving his worst performance to date), is all puppy-eyes within hangdog expressions and inane mumbling. He aims for Holden Caulfield-style loner broodiness, but doesn’t even reach Donnie Darko moodiness; he conveys no such inner torment; Leland has the depth of a puddle. His performance is proof that great actors often require lesser transitional roles in which to practice their craft. The rest of the cast, bar two performers (Sherilyn Fenn, who in mere minutes of screen time inhabits a thinly-written and thanklessly peripheral character with subtlety; and Don Cheadle, who injects some much-needed sturdy compassion into his role), are given very little to do apart from vacantly react to each other in glacially fractured ways that almost always seem to be depicted in films such as this. Martin Donovan, Ann Magnuson, Kerry Washington, Chris Klein and Jena Malone are mostly wasted and Michelle Williams and Lena Olin have literally nothing to do. It’s also worth noting that Kevin Spacey (who produced) gave himself a crucial role. There's an air of awe that surrounds his character (Leland's father) but with little concrete reason; where he intends lofty stature, there is merely empty superiority.

Most of the characters act in such vapid and gutlessly unconvincing ways that the film oftens baffles when it should be holding our attention. Since when has complete inaction and dormant pondering qualified as proficient characterisation? Sometimes it takes a little bit more gumption, outwardly expressive emotion and, yes, believable effort to make a resounding impact: ‘Debilitative’ isn’t an acting style. Leland’s violent outburst, which bookends the narrative, is in no way the act of good-hearted selflessness that the film posits. It's a vacuous, selfish deed with no valid raison d’être (especially when you take into account exactly what was at stake). It’s the film's ending, though, which really reveals it to be a shallow exercise in manipulative storytelling. *SPOILERS* So, poor little Leland had to kill Becky (Malone) and Julie's (Williams) "retarded" brother Ryan (Michael Welch) because he ‘understood his sadness’? He thinks that a life of disability and difference isn't worth living? Ok. Right. But, doesn't his very act deprive Ryan of the chance to discover, for himself, otherwise? The film ultimately subscribes to a vastly flawed and hollow agenda, one that Hoge and co. were unfortunately hanging all their narrative's hopes on. *END SPOILERS* It ends as a monotonous, whimsically-played “life-affirming” drama with an inflated sense of self-importance and a waste basket full of misjudged liberalisms that it doesn't understand. There's nothing integral in the way of ideas about what it means to be a person who actually, in and of this world, truly gives a shit. It’s a terrifically bland exercise in faux emotionalism that depreciates as it plays. It has no real sense of the kind of human tragedy that it so willingly, yet fraudulently, wears on its sleeve.
Posted by Craig Bloomfield at 21:37