This week my "Take Three" column (every Sunday, three write-ups on three performances in a supporting/character actor's career) over at The Film Experience features Barbara Hershey in Beaches, The Entity and Black Swan. 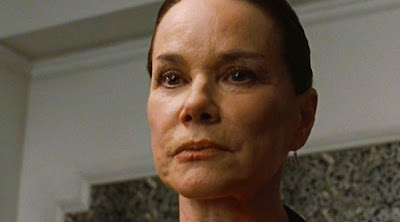 Barbara Hershey as pushy stage mother Erica Sayers in Black Swan (2010)
Take Three: Black Swan (2010) Hershey was entirely perfect casting in Black Swan. She’s the right age, has the exact look befitting an unusual ballet-horror movie, is seasoned enough to convey the exact tone of her character (Erica Sayers, pushy stage mother and ex-ballet star – I wouldn’t mention the term ‘has-been’ around her) and fits well within the overall dark timber of the piece. She inhabits the role with requisite poise and gives great face, either swelled with fury, sincerity or girlish glee. To say she lived vicariously through onscreen daughter Nina (Natalie Portman) is pointing out the obvious. It’s a given that Erica is clearly not living better through displaced ballet from the off; the queasy, mechanical dependency she displays for Portman’s successes, hidden behind the dimmed light of motherly tenderness, gives Black Swan a lot of its freakish charm. The technical aspects go a long way in creating an aura of unease, but Hershey is the living embodiment of all the on screen fear that really terrorises...

Read the rest here
Posted by Craig Bloomfield at 20:02