This week my "Take Three" column (every Sunday, three write-ups on three performances in a supporting/character actor's career) over at The Film Experience features Brooke Smith in Series 7: The Contenders, Melinda and Melinda and The Silence of the Lambs. 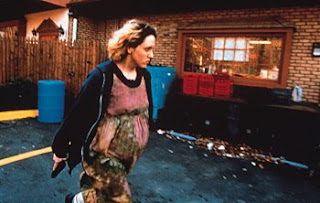 Brooke Smith in Series 7: The Contenders
Take One: Series 7: The Contenders (2001) Smith's performance as Dawn “Bloody mama” Lagarto in Daniel Minahan’s Series 7: The Contenders is a goldmine of maternal aggression. Dawn is a risk-taking, self-serving, take-no-prisoners single pregnant woman with a gun and a hit list of new Contenders to wipe out. It's as far from life-affirming as it gets making Dawn the kind of caustically fantastic role that most A-list actresses would give their right arm... to steer clear of. Thank the gods of indie cinema that they gave us Brooke Smith, then. We first see her enter a convenience store to shoot an old guy in the back. “You got any bean dip?” she asks the cashier. The humour is black and she dishes it dry. In one of the film’s sickest/funniest TV-montage parodies we see Dawn slit someone’s throat in a lift, kick a guy downstairs, drown someone else in a toilet and strangle a woman in a car à la Halloween’s Michael Myers, all whilst with a bun in the oven. This is not a rom-com...

Read the rest here
Posted by Craig Bloomfield at 13:16