This week my "Take Three" column (every Sunday, three write-ups on three performances in a supporting/character actor's career) over at The Film Experience features Danny Glover in Be Kind Rewind, Lethal Weapon and To Sleep with Anger. 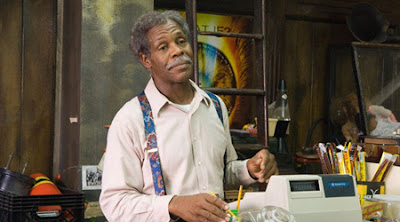 Take One: Be Kind Rewind (2008) The most recent role in which he’s perhaps been most memorable was as the ageing, single, Fats Waller-loving video-shop owner Mr. Fletcher in Michel Gondry’s 2008 comic throwback Be Kind Rewind. He starts out like a kind of reluctant, but good-hearted curmudgeon unwilling to embrace DVD, but he ends up an accidental impresario of both old-school values and new ventures by joining the ranks of the neighbourhood “sweders” to make a community doc on Fats Waller. He typifies both the film’s antiquated side (VHS), but also its embracing of new technologies (DVD, digital) and social connection (people + cinema = growth). The scenes of him trotting off to memorialise Fats and snoop on his rivals would make an endearing film of its own. If Danny Glover could “swede” a film of himself doing just that, I’d be happy...

Read the rest here
Posted by Craig Bloomfield at 19:54