At the Cinema: Clash of the Titans 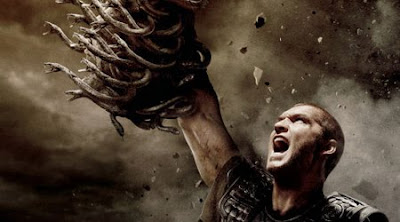 For the third time in a year Sam Worthington has bore a dull hole into the cinema screen as an action lead. After Terminator: Salvation and Avatar, he's now added Perseus - son of Zeus, saviour of the people - in Clash of the Titans to his trio of lead-man dullards. This new version soups everything up a hundred notches or so, as is the wont of today's blockbusters, and points to being enjoyably crummy fun from the off. But as it rushes through its back story (Perseus' adoptive family dies) and set-up (he wants revenge on mean old Hades who killed them) it rapidly becomes uninvolving and rather joyless. Events plays out in quick succession like an abridged, more plasticy version of Peter Jackson's Lord of the Rings trilogy: it's Gods of the Sword in microcosm (Liam Neeson's Zeus also seems to have little action figures of his puny earthlings to play with). Its narrative follows an iterative pattern - battle, pause, battle (with giant scorpions - actually this is a good bit), pause (for some depthless reflection on events), battle (with a limp, and limp-haired, Medusa), pause (for some light explanatory dialogue), battle (with the Kraken - or the Krahr-kern as Ralph Fiennes' Hades garbles it)... and so it repeats until, well, it stops. And pause - there could well be a sequel. 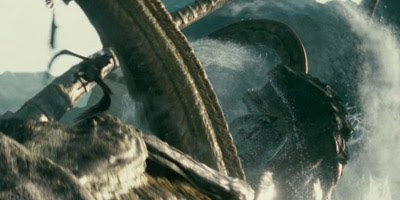 The Kraken's tail and a winged beast duking it out in mid-air in Clash of the Titans
All the mythical beasties are dispatched far too quickly and efficiently: they appear, some daft but exciting swordplay feels imminent, then it's all over in a flash. Done and dusted. On to the next beast, then to the end - but not before everyone has a right old woeful chuckle at something foolhardy in between. It's odd, though, that it should all feel so humourless. As soon as Neeson's Zeus (dressed in armour so shiny it looks as if it's lit from within) and Fiennes' Hades (who looks like Bill Bailey might do in 40 years time) appear, it looks as though we're in for some hoary old camp nonsense - with these two heavyweight stalwarts in Greek myth get-up dishing out thick slices of meaty banter; they're a couple of bearded hams, rasping and croaking at one another in such a strained, shouty manner that I placed bets on who would keel over and crumble into a pile of grit first - but no, it all sinks into a po-faced race to the flat finale.

It's a massive shame that Worthington has now wedged himself into audience's minds as the new go-to guy for fantasy cinema heroics. He showed immense promise in an early role in Australian drama Somersault, but hasn't as yet followed it up with a worthwhile part since. He now seems prematurely content to play the Lone Saviour of the People until something comes along that brings him back to the real world. Or until Russell Crowe retires and leaves available the gruff, Antipodean everyman role in action-adventure filmmaking. The rest of the cast hang around long enough to grab their payslips, and are then dispatched according to plot importance; the cheaper employees die first. (Although I think they missed a trick in making Medusa an all-CGI she-snake - this should've been a part ripe for a laugh for a game actress to sink her fangs into; Meryl Streep likes a giggle these days - ya never know she mighta...) 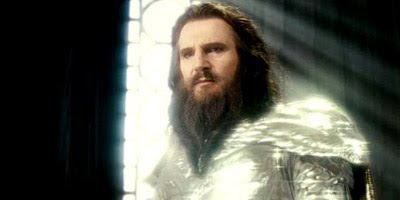 Liam Neeson and his shapely beard duking it out for acting honours in Clash of the Titans
Clash's slick superfluity is par for the course now in such speed release blockbuster entertainments. The quick decision to cash in on the novelty trail left by Avatar by shunting it into 3D is the most likely reason for this. (I deliberately chose to see the 2D version - I doubt much was reduced by seeing it as it was originally intended.) Part Pirates of the Caribbean, part The Mummy and all cheese; it's a mid-level romp, out before the summer big-hitters, positioned to whet our appetites for a probable franchise. But it's all too forgettable and too hasty (at a mere 106 mins. it's a thrifty watch for a big adventure epic) to make much of an impression. I was disappointed that it didn't keep the early campiness going throughout. You never know, it might have had the makings of a naff classic. The producers clearly felt the need to remake it, fair enough (there's little point in bemoaning remakes these days - they happen), but to then add a late-in-the-day 3D overhaul feels like merely bucking to trends. Maybe all that was needed, though, was to take Desmond Davis' 1981 original (with Ray Harryhausen's wonderful stop-motion special effects), give it a quick tart up and polish, and see it on its way to a glorious re-release. Out with the new, in with the old?
Posted by Craig Bloomfield at 18:06