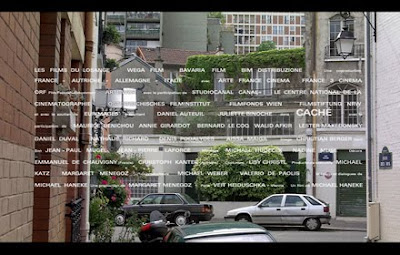 The title sequence of Michael Haneke's 2005 exploration of guilt and surveillance consists of just one shot which, in visual terms, simply and effectively encapsulates the entire thesis of his film. The image (and here the image is everything - and possibly nothing also) is a static, fixed perspective shot of a house situated among several others on a street (rue des iris) in a seemingly tranquil part of Paris' 13th arrondissement. The opening titles scroll out word by word over this one image, from top left to bottom right. It's unlike how titles normally appear in the majority of films: production companies, cast and crew names and the film's title itself all sit alongside one another in a solid block of text.

The shot lasts roughly between four and five mins., and nothing eventful occurs during this time - behind the text it's just a street scene. Or is it? After the titles all together finally fade - and after a few pedestrians enter and exit the film frame - the shot changes to a closer view of the house: a woman and man depart, then the man returns moments later alone. Suddenly we're aware that the same (film) image we've been watching has turned to that of a videotape image (diegetic film has morphed into non-diegetic VHS). Static fast-forward lines are visible: we are now rushed into the central mystery of Haneke's film.

What's so good about this opening is that its minimalism is both deceptively enthralling and frustrating at the same time. Nothing much is outwardly happening, but the very (stationary) image itself seems to be telling us more than we might initially assume. Is something vital occurring on the image's periphery? Do we need to pay close attention to the inactivity taking place? Is this just a rather dull and uneventful establishing shot - and are we being nudged in the ribs to infer a layer of meaning within it that isn't actually present? Haneke doesn't - here and by the film's close - explain what's what to any obvious degree. We are left to work out what we want to; he's just the one pointing the torch in the (generally?) right direction.

Are we meant to see something - a clue, a vital piece of information - amid the text on screen, as the title of the film itself hints at? What the titles do do is make us aware of both the limitations and the very expansiveness of the film frame. Haneke is effectively telling us to notice anything and everything that may happen in any corner of the (1.78:1 aspect ratio) screen, and at any time during the film. He's slyly pushing us to use our sense of detection, to search out hidden ideas and themes from the very start. He's saying, if you want a mystery here it is - but I'll make you do all the work.

It's a great opening shot: visually striking, foreboding and typographically elegant - and, in a cheeky, artful way, it embodies all the hard graft and vexation of a particularly unfathomable jigsaw puzzle. All eyes front and centre, everyone!
Posted by Craig Bloomfield at 19:13