At the Cinema: The Joneses 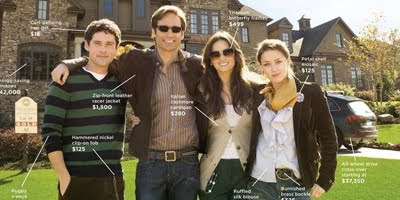 Whilst watching The Joneses (in which Demi Moore and David Duchovny are employed together as a "couple", with two teenage kids, and inserted into an affluent neighbourhood to sell a company's high-end goods - they are effectively selling the American dream) I kept thinking that there were at least two other, better films that could be made from its premise. The tone the filmmakers went for fell somewhere between light satire and (eventual) lighter romantic drama. The problem, though, was that it was too light either way. One way to go would be to have heightened the satire considerably, made the comic elements a touch broader so that they made more of a forceful point (this is the more commercially viable route); another way would've been to zero in on the apparent creepiness of the idea; there are, bubbling beneath its surface, several ominous undertones which, in the hands of, say, David Cronenberg or John Carpenter, could've flourished and been made more coldly sinister (this, of course, would be the less commercially viable option, though one with a whole lot more potential mileage).

There are many montage sequences where the family are seen carrying out their particular type of personalised product placement. All four fake family members target their respective social niches: latest teen fashions in daughter Amber Heard's high school cliques; son Ben Hollingsworth's jock-aimed guy-gadgets; Moore's chef-made, posh party nibbles and household must-haves; and Duchovny's middle-age crisis golf accessories. But these frequent montages appear to replace any meaningful character development. Two-thirds of the way in we know the family's sales aims, but what we don't know is how they interact on a personal level, apart from some late perfunctory issues (glaringly obvious from the start) treated with only surface care - and this is at a point when the audience is asked to make a deeper investment in their real selves. Knowing more about their reasons for joining up for such a life-jarring job option (aside from its obvious material perks) and a deeper display of characterisation may have made me care more for their situation. Buy into this?: The Joneses welcome you and your wallets
But the film is rarely boring, and has some fine moments none the less. Moore and Duchovny are ideal for their roles, and both play to their strengths (him - cocksure confidence; her - icy determinism). The Joneses strong conceit is intriguing enough to just last its average running time, but it often feels padded out in flimsy narrative attire. Still, it gets points for attempting to point out a few material truths about the way people still covet the beautiful things in life despite the current shaky financial climate. Its release is perfectly timed, too - are we not currently at the height of the craze for the best and the newest lifestyle must-haves?

Although I think the filmmakers missed a trick in the promotion of the film. As far as I know there were no ad campaigns pushing The Joneses in any innovative way (the generic posters say nothing about the film). Its premise screams for a viral marketing campaign in accordance with its plot. The producers should've hand-picked members of the cinema-going public, as they often do when calling for test screenings (if production companies have to use test screenings, why not try and change tack, shake it up a little?) and sent them forth into cinemas, restaurants, show homes, anywhere the film's target audience might congregate, and do the one thing that's commonplace in Hollywood filmmaking in regards to attempting to create a hit movie (and which dovetails with the way the Joneses go about their sales techniques) and use one simple tool: word of mouth. The Joneses push its wares subliminally, but it could've tried for the hard sell.
Posted by Craig Bloomfield at 18:26