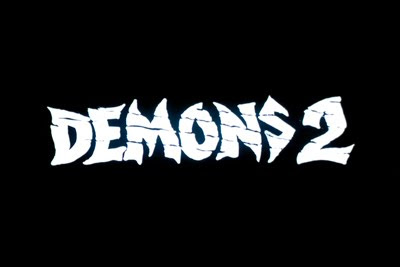 Archetypal '80s horror movie music - all tinny, dramatic synth, electric guitar and drum machine ungodliness that goes for a cheese-topped Gothic effect - it's grandly daft as only the opening of cheap 1980s Euro-horror can be. This music (by acclaimed musician Simon Boswell, who did an amazing 11 scores for Bava in four years), matched with the ragged and scratched lettering (it shakily pulls forward onto the screen), perfectly captures the type of horror flick that I lapped up during my formative scary movie-watching years. Talk about the feeling of anticipation in waiting for a film to start!

Lamberto (son of Mario) Bava quickly followed up his first Demons (1985) film with this sequel. Everything about it was fast and frenzied, choppy and cheerful. Both films' opening titles - and in fact both films - are as good as each other, in their own no-fuss, low-grade way - just the way I like them to be. But this sequel just edges out its predecessor as the slightly better film. It's a great entry in the trapped-in-a-high-rise-so-let's-fend-off-demonic-forces canon** (it sits just a floor beneath Cronenberg's Shivers (1975), for me). It's also notable for being Asia Argento's feature film debut, too (dad Dario wrote and produced).

* Some versions have the on-screen title as: Dèmoni 2: L'incubo ritorna (Demons 2: The Nightmare Returns).
** If there is such a canon - and in my world, there is.
Posted by Craig Bloomfield at 20:12