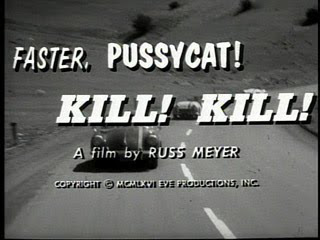 Shadowed male faces ogle writhing Go-Go-Dancing women - shot from below, as if the camera is viewing them as statuesque be(s)hemoths (as indeed they are). Cut to a car radio, then to Tura Satana, as Varla, laughing maniacally in the driver's seat (and she was firmly in the driver's seat throughout the film): the opening title appears on the screen with a thud - to the tune of The Bostweeds' 'Faster Pussycat' - as Varla and her girls bomb down the highway.

It takes three scrappy, (im)perfectly cobbled-together typefaces to handle the words Faster, Pussycat! Kill! Kill! The rest of the titles follow as the girl gang, intent on murdering, beating and kidnapping their way to finding a hidden stash of cash, race to a life of turning the tables on a world of man idiots.

Tommy: Look, I don't know what the hell your point is, but...
Varla: The point is of no return and you've reached it!

A Film by Russ Meyer indeed.

It's such a great film opening, completely redolent of his shabby, B-Movie style, and one that in its own demented, crazy-cool way perfectly sets up the titillating hijinx that follow.

Also worth another look, as ever, is this wonderful theatrical poster for the film: 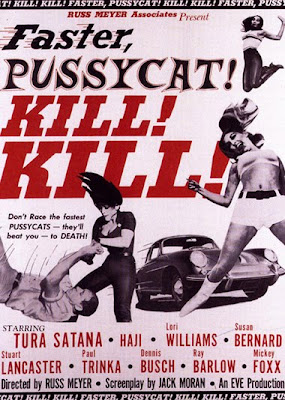