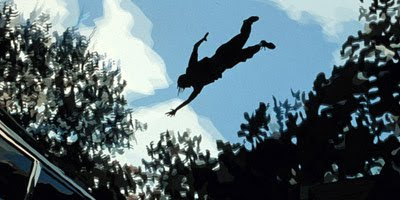 You know when someone starts telling you about a dream they had and there’s a split second, a fleeting moment, where you realise that you are going to have to sit and listen, however long it takes, and however much what they’re saying bears no relation to you or your experiences? Well, that’s how I felt about Richard Linklater’s Waking Life (2001).

Other people’s recollections, their recounting of events or images they’ve dreamt (or dreamt up), can occasionally be interesting, but usually only if there is some kind of shared ground, an innate connection which allows you access to their particular world view. If not, then it feels like a lot of just being talked at - which when stretched to an hour and a half (and on the subject of what reality means, the meaning of life etc) can be tiresome at the best of times. When the conversations are as blankly matter-of-fact and as unattainably distancing as those contained in Linklater’s film, then there’s only a slim entry point into it all. The more discerning, less tolerant viewer of this kind of introspective soul speak may feel left baffled in the cold. 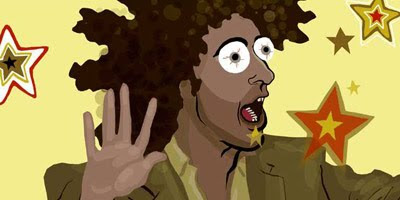 The topics may be interesting enough for those that might want to join in on the portentous philosophic contemplation offered up, but it doesn’t allow for the kind of human-centred moments that might have added a touch of charm to a given scene. When it does allow this, on a few rare occasions, it works well enough but always remains a one-way, one-track dialogue. (I think he's much better suited to the kind of amiable, free-associative dialogue seen in Dazed and Confused (1993) and the Before Sunrise/Sunset (1995/2004) films.)

The person-to-person, loosely-threaded-chain approach was tried and tested better by Linklater in his debut Slacker (1991). The approach here is much the same - though we do have the central figure of Wily Wiggins guiding us along - but it misses out on the little touches of spontaneity which made Slacker’s random grab bag of drifters feel idiosyncratic and strangely funny. Here, because the visuals are “animated over” after the live action footage was shot, events have to adhere to a specific pre-set plot template. But there are certain visual tricks and embellishments that really flourish, and which wouldn’t be as inspired or even possible within live-action footage. Some characters become further ‘animated’ and excitable in conversation by the use of odd little cartoonish visual aids - flashes of brains, flames, sparks and many other kinds of whizzing objects pop up and flit across the film frame. This rather nicely breaks up the worthiness of the otherwise coldly tiresome nuggets of narrative. Although I thought the inventive rotoscope technique worked much more fluidly in Linklater's later A Scanner Darkly (2006) - and it was better matched to Philip K. Dick's source ideas. 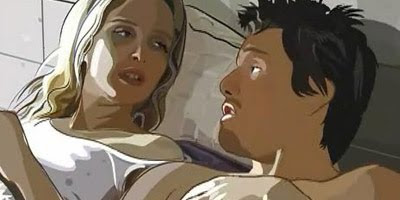 The music, by Glover Gill, is lovely though; all jumpy bursts of accordion and violin which fuels and shuttles everything along, providing a flowing, segueing accompaniment nicely enough. Director Steven Soderbergh pops up to tell an anecdote about Billy Wilder and Louis Malle (quite funny it is, too) and Ethan Hawke and Julie Delpy reprise their Before Sunrise (pre-Sunset) roles as some sort of in-joke - although the natural way that conversations arose between them in those films are absent and replaced with more tedious theorising.

For all its lofty chat and endless, answerless questioning on life, death, dreams and reality, I was none the nearer to experiencing an approximation of what their waking life meant. It’s the smaller, more inconsequential details and moments which offer hope. Amid a fairly astute and attention-grabbing conversation on the nature of film and memory, one speaker (Caveh Zahedi) interrupts the other (David Jewell) by mentioning the appearance of a mosquito on the other’s face and offers to swat it for him before continuing in his lecture. The film is just about bearable for the few tiny instances of human interaction that raise a warm smile instead of a weary shrug. But, overall, maybe I just didn't get it. But I'm doubtful that there was actually anything to get exactly, anyway. Give me Monty Python's Meaning of Life (1983) instead.
Posted by Craig Bloomfield at 12:13