At the Cinema: Essential Killing 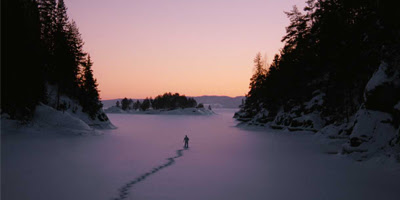 Vincent Gallo goes to great lengths to run from the enemy in Essential Killing, Jerzy Skolimowski‘s new film about a (possible) Taliban defector’s AWOL escapades after he blows a trio of US soldiers to smithereens in a cavernous valley somewhere maybe in Afghanistan or Iraq or, perhaps, it's somewhere... indescribably other. Labelling is a no-go area here. There’s visual detailing, but no contextual prescription: there are no names and next-to-no dialogue throughout the film’s 83-minute runtime – just moments of action, then inaction. It’s less the kind of action which usefully propels the narrative forward – essentially a stop-start trek through a range of increasingly laboured situations and terrains – and more a series of unfortunately absurd survival scenarios. Amongst their number: Gallo’s impromptu roadside breast-feeding from a rightfully irate woman (if there’s some kind of infancy message inferred within this scene, surrounding the Gallo character, then the film is all the worse for it); a typically uncomfortable waterboarding scene; several killings (essential or otherwise) awkwardly carried out on the snowy wastelands; and a moment where Gallo vomits up blood onto a horse. 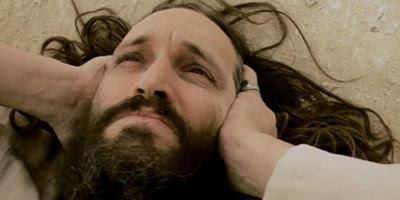 Skolimowski clearly subscribes to the ‘actions speak louder than words’ adage, but his action often mumbles. He can conjure up some alarming and intriguing images that fit into his frustrating yet straightforward plot (the expanse of trailing footprints in snow, a disorientating night-time truck wreck), but they’re clearly visual aids to a deliberately evasive message. (Does it all merely boil down to eye-for-an-eye statistics?) Such oblique goading of an audience’s concerns can come across as slightly circuitous polemicising. And as such the nagging feeling of overriding emptiness, of blithe unconcern, for the darkly reticent adventure acted out so earnestly and woefully on screen doesn’t ever fully abate for Essential Killing’s slim duration. Gallo suffers hard – but ultimately what for? Essentially it’s up to us to decipher his lot. But the film perhaps confuses intrigue with puzzlement for much of its brief span.
Posted by Craig Bloomfield at 21:34