This week my "Take Three" column (every Sunday, three write-ups on three performances in a supporting/character actor's career) over at The Film Experience features Gloria Grahame. 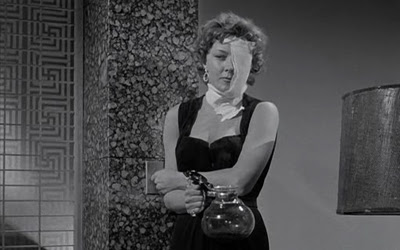 Take One: The Big Heat (1953). When you think of Film Noir, you think of hard-boiled anti-heroes in fedoras, smoking, permanently with gun. But in some noirs it’s ladies first. Fritz Lang’s dirty, masterful noir par excellence The Big Heat has a first-rate femme fatale in Grahame’s Debby Marsh. Thank 20th Century Fox for replacement pleasures then: Grahame stepped in when original pick Marilyn Monroe’s fee became too high, giving the the film an extra sprinkling of salty sass. She excelled in each moment, whether heartfelt or hardened; I can only hazard a guess that Monroe might have made Debby’s eventual desperation too pleading. Under Grahame’s control Debby’s desperate dilemma was frenetic and wrenching. Never has the rapid flush of devastation been so well conveyed on screen as when she runs to Glenn Ford’s apartment to beg for cover.

Read the rest here
Posted by Craig Bloomfield at 18:53