This week my "Take Three" column (every Sunday, three write-ups on three performances in a supporting/character actor's career) over at The Film Experience features Anthony Mackie. 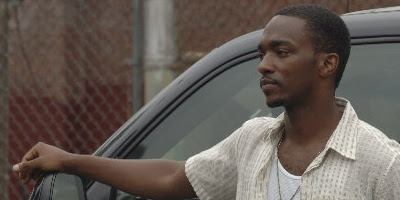 Take One: Half Nelson Mackie puts in a vital and sincere performance in 2006 indie drama Half Nelson. He’s Frank, a former friend of Drey’s (Shareeka Epps) jailed brother and a Brooklyn drug dealer, who is intent on dragging Drey into his orbit as a local drug mule. That's an idea that her teacher Dan (Ryan Gosling) takes umbrage with, especially in one riveting scene where Dan confronts Frank on the street, warning him to leave her alone. Mackie avoids the overplayed clichés in portraying drug dealers on screen. He’s calm, charming and actually feels he’s helping by keeping Drey near. He wins Dan around, in a way, too. He’s just someone making his way, just like everyone else in Ryan Fleck’s sombre, thoughtful film...

Read the rest here
Posted by Craig Bloomfield at 21:10